Resulting ecological shift could have rippling impacts on the boreal region 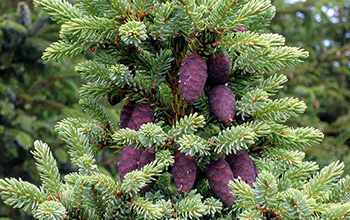 The black spruce -- a key species on the boreal landscape -- is losing its resilience and capacity to regenerate in the face of warming temperatures and increasingly frequent Arctic wildfires. The trend could result in a landscape-wide ecological shift that would have a complex and rippling impact on the region, including an acceleration in permafrost thaw and a loss of valuable biodiversity, scientists report in Proceedings of the National Academy of Sciences.

In boreal North America, the thick, spongy soils in which black spruce trees grow are made of peat moss and lichens that retain moisture. But when they dry out, they are highly flammable. Black spruce trees rely on fires for regeneration -- their cones open in the heat and drop seeds on the charred soil -- but this study, supported by the U.S. National Science Foundation through its Bonanza Creek Long-Term Ecological Research site, indicates that more severe fires that burn deeper into peat soils are leading to a short circuit in the regeneration process.

"Predicting how regional forests will respond to change is important for human lives and livelihoods, just like predicting the weather," said Francisco (Paco) Moore, a program director in NSF's Division of Environmental Biology. "This study is the result of decades of investment in understanding ecology, and that understanding is now helping us predict and prepare for change."

In synthesizing data from more than 1,500 fire-disturbed sites, the researchers found that black spruces' ability to regenerate after fires dropped at 38% of sites and failed completely 18% of the time. Shifts in wildfire regimes are pushing black spruce forests to a tipping point, beyond which the species may lose its place as the dominant tree in boreal North America.

"This trend is especially alarming given its potential impact on Arctic carbon storage," said Brendan Rogers of the Woodwell Climate Research Center, a study co-author. "In many parts of the boreal region, the mossy soil layers that promote black spruce regeneration also insulate permafrost. As fires increase and these forests dry out, however, loss of black spruce forests could accelerate permafrost thaw and trigger a warming feedback loop, pushing black spruce to its tipping point and facilitating the release of massive amounts of carbon from the permafrost into the atmosphere."