Flash droughts: When, where and why? 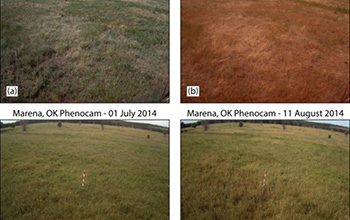 Flash droughts are rapidly developing, unexpected periods of drought. These droughts can cause severe impacts in agricultural and other systems, as well as ripple effects that extend even farther.

"Given that flash droughts can develop in only a few weeks, they create impacts on agriculture that are difficult to prepare for and mitigate," said Jordan Christian, a researcher at the University of Oklahoma and lead author of study in the journal Nature Communications. "Even when environmental conditions seem unfavorable for rapid drought development, a persistent, multi-week lack of rainfall coupled with hot weather can create flash drought development."

Flash droughts can drastically reduce crop yields, and lead to severe economic losses and potentially disrupt food security, according to Jeffrey Basara of the University of Oklahoma. "These impacts can have cascading effects, including increased risk for wildfires, depletion of water resources, reduction of air quality and decreased food security."

In the U.S., Basara said, "we can often mitigate some of the effects with irrigation and other tools, but a number of these events happen in places where they can't be mitigated. When that happens in areas dependent on subsistence living, flash droughts can be devastating."

The study identifies global "hotspots" for flash droughts from 1980 through 2015. Of the 15 locations analyzed, eight were identified as having the most flash drought occurrences for their regions and as being locations with at least 20% of their total land areas used for agricultural production.

"These researchers are supported by a U.S. National Science Foundation EPSCoR award with the goal of producing sustainable solutions to challenges such as flash floods and other 'whiplash events' that significantly impact the lives of Oklahomans and people nationwide," said Chinonye Whitley, a program director in NSF's Office of Integrated Activities.