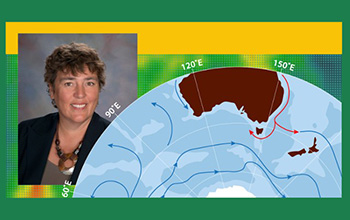 A new study increases the understanding of global water flow.

A study of ocean currents led by Rowan University researcher Beth Christensen deepens our scientific understanding of global water flow and, by extension, the planet's evolution.

Christensen is lead author of a study published in the journal Geophysical Research Letters, a publication of the American Geophysical Union.

The research examined an ocean current that runs about 500 to 1,000 meters below the surface known as the Tasman Leakage, or TL. It flows around southern Australia and links the Pacific and Indian oceans, eventually reaching the South Atlantic.

While scientists have long studied international ocean flow patterns, the TL was discovered fewer than 20 years ago. Christensen said her team's analysis of ancient, deep-water sediments proved that the TL has carried water around the world for at least 7 million years.

"The oceans circulate over the full range, from shallow to deep," Christensen said. "The TL went undetected until just recently, and we are still learning the role it plays in global ocean circulation and climate."

The study examined ocean samples and seafloor cores collected through the International Ocean Discovery Program, an initiative supported in part by the U.S. National Science Foundation and fielded by a team of scientists conducting shipboard research around the world.

The research is significant, Christensen said, in part because it deepens scientific understanding of the developing planet.

"There were a whole series of changes that occurred around 7 million years ago," she said. "The TL started when some of those changes were happening, including a global cooling. It was a period in which the world got cooler and drier."

Christensen said it is unclear from the research if the TL formed in relation to climate and other geologic changes, only that it developed concurrent with them.