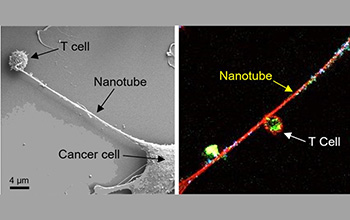 Researchers at Brigham and Women's Hospital, using nanotechnology research infrastructure funded by the U.S. National Science Foundation, observed cancer cells disabling the immune cells attacking them. The cancer cells removed the mitochondria -- the energy source -- of the immune cells through tiny, tentacle-like tubes that connected the two. The research team published the results in Nature Nanotechnology.

"By carefully preserving the cell culture condition and observing intracellular structures, we saw these delicate nanotubes and they were stealing the immune cells' energy source," said co-author Hae Lin Jang. "It was very exciting because this kind of behavior had never been observed before in cancer cells. This was a tough project as the nanotubes are fragile and we had to handle the cells very gently to not break them."

"Cancer kills when the immune system is suppressed and cancer cells are able to metastasize, and it appears that nanotubes can help them do both," said corresponding author Shiladitya Sengupta. "This is a completely new mechanism by which cancer cells evade the immune system and it gives us a new target to go after."

The researchers next turned to examining what would happen if the cancer cells were prevented from disarming the immune cells. Evidence suggests that inhibiting nanotube formation has the potential to improve patient outcomes.