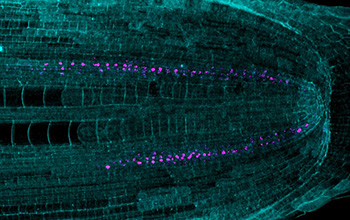 A gene generates multiple layers of cortex that have roles in drought and flooding stress.

A U.S. National Science Foundation-funded study revealed how plants add new cell layers that help them resist climate stressors like drought or flooding. The research focuses on corn -- a critically important crop around the world -- to create a cell-by-cell map of the plant’s root system, which mediates drought stress and absorbs nutrients and fertilizer from the soil.

"We discovered how corn expands its cortex tissue, which makes up much of the crop’s root system,” said Kenneth Birnbaum of New York University, senior author of a paper that appears in the journal Science. “Adding layers to the cortex tissue is a key evolutionary feature that generates ways for plants to tolerate drought and flooding and improve nutrient uptake.”

The traits are “critical targets to allow plants to withstand global warming and reduce the carbon footprint of crops," added Birnbaum, who led the project in collaboration with researchers at Cold Spring Harbor Laboratory and the University of Pennsylvania.

To create a single-cell map of the corn root, the researchers first broke apart the root using cell-wall digesting enzymes to generate single, free-floating cells. New approaches then allowed them to analyze the mRNA content of individual cells, distinguishing molecular features that lead to specific types of specialized cells.

They next mapped the cells back to their location in the corn root, akin to assembling a 10,000-piece jigsaw puzzle without a guide. To solve the puzzle, the researchers used fluorescent dyes that penetrated root tissues at variable depths to label and isolate different layers, like separating the layers of an onion, giving them gene landmarks.

"The ability to leverage advances in genomics technologies allowed this research team to distinguish and spatially map individual cell types in the corn root, leading to significant new clues about how plants can adapt and survive in the face of fluctuations in environmental conditions due to climate change," said Diane Okamuro, a program director in NSF’s Division of Integrative Organismal Biology.