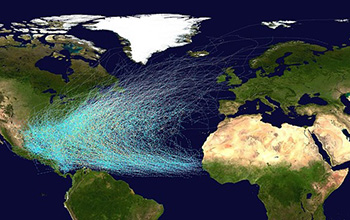 When forecasting how storms may change in the future, it helps to know something about their past. Judging from historical records dating back to the 1850s, hurricanes in the North Atlantic have become more frequent over the last 150 years.

However, scientists have questioned whether this upward trend is a reflection of reality, or simply an artifact of lopsided record-keeping. If 19th-century storm trackers had access to 21st-century technology, would they have recorded more storms? This inherent uncertainty has kept scientists from relying on storm records, and the patterns in them, for clues to how climate influences storms.

A U.S. National Science Foundation-funded study published in Nature Communications uses climate modeling, rather than storm records, to reconstruct the history of hurricanes and tropical cyclones around the world. The results of the study support the notion that North Atlantic hurricanes have increased in frequency over the last 150 years, as suggested by historical records.

In the models studied, major hurricanes, and hurricanes in general, were more frequent today than in the past. And those that made landfall appeared to have grown more powerful, carrying more destructive potential.

Curiously, while the North Atlantic has seen an overall increase in storm activity, the same trend was not observed in the rest of the world. The study found that the frequency of tropical cyclones globally has not changed significantly in the last 150 years.

"The evidence does point, as the original historical record did, to long-term increases in North Atlantic hurricane activity, but no significant changes in global hurricane activity," says study author Kerry Emanuel of MIT. "It certainly will change the interpretation of climate's effects on hurricanes -- that it's really the regionality of the climate, and that something happened to the North Atlantic that's different from the rest of the globe. It may have been caused by global warming, which is not necessarily globally uniform."