More bird species in the tropics than previously thought 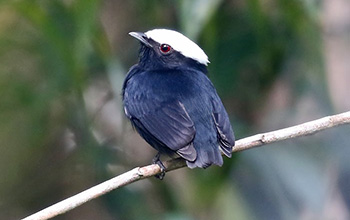 A recent study of a perky little bird suggests there may be far more avian species in the tropics than those identified so far. After a genetic study of the white-crowned manakin, scientists say it is not just one species, and that one of the main drivers of its diversity is the South American landscape and its history of change. The results are published in the journal Molecular Phylogenetics and Evolution.

"We found that the white-crowned manakin probably originated in the highland forests of the Andes Mountains in northern Peru," says lead author Jacob Berv. "Today, this bird is also found across the Amazon basin, in the lowland rainforests of Brazil, Peru, and many other countries, including parts of Central America." Berv conducted the U.S. National Science Foundation-funded research while at Cornell University.

"This study shows that there is a lot of evolutionary history embedded in what is commonly referred to as a 'single widespread' species in Amazonia," says co-author Camila Ribas at Brazil's National Institute of Amazonian Research. "The white-crowned manakin is an example of a phenomenon that is probably more the rule than the exception in Amazonia -- diversity is vastly underestimated by the current taxonomy."

Around 2.5 million years ago, populations of this manakin species expanded out of the Andes, though many populations remain there today. Those that moved eventually became isolated in pockets of habitat defined by mountains, plains, rivers and climate. Over the course of time, white-crowned manakin populations evolved independently, accumulating differences in their songs and plumage patterns.

The study authors suggest many of these pocket populations are now different enough from one another that they should be recognized as separate species. That is especially true if the variations in song make it unlikely that isolated populations would be able to recognize one another and breed -- the biological definition of a species.

"To understand evolutionary processes in Amazonia we need many more studies like this one, with dense geographic sampling," Ribas says. "For this we need to support biological collections that are able to accumulate samples through time."

The scientists say that underestimating the number of species in South America has important consequences for conservation, especially for endemic species threatened by ongoing habitat loss.

"We've basically just scratched the surface," says Berv. "If what holds true for this species is indicative of what's taking place in other poorly studied species, then we have hugely underestimated the amount of biodiversity in the South American tropics."