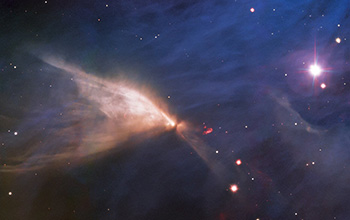 Nebula powered by a young star obscured by a circumstellar disk.

The young, low-mass star that powers the nebula is obscured by a dark vertical band and streams of gas that tunnel through the interstellar cloud that formed the star. Light from the star bounces off the tunnel walls, creating the wispy appearance of the nebula.

Astronomers have suggested the dark band at the center of the Chamaeleon Infrared Nebula is a reservoir of gas and dust orbiting the star, known as a circumstellar disk. Circumstellar disks are usually associated with young stars and provide the materials to build planets. Astronomers believe that the nebula's star is a young stellar object embedded within the disk. The nebulous blue background in the image is light reflected from a nearby star.

The image of the nebula was captured by the U.S. National Science Foundation-funded Gemini South telescope located atop Cerro Pachón in Chile, part of the international Gemini Observatory, a program of NSF's NOIRLab. The image was produced by NOIRLab's Communication, Education & Engagement team as part of the NOIRLab Legacy Imaging Program.