Planetoid is almost 146 light-years away from Earth 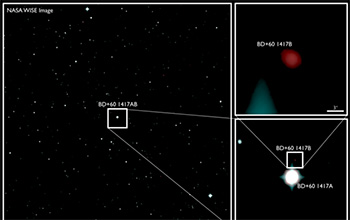 Citizen astronomers have detected an object orbiting a sunlike star that had been previously overlooked. The object is thought to be a small brown dwarf star 10 to 20 times the size of Jupiter and very distant from its host star -- more than 1,600 times the distance between Earth and the sun. Researchers investigated the discovery and detailed their findings in The Astrophysical Journal.

A “Backyard Worlds: Planet 9” participant alerted scientists to an object that appeared to be moving with a star. Astronomers used near infrared spectroscopy to observe the star and object. The young object was farther away from its star than expected considering its comparatively low mass. Few objects with such different masses from their host star have been as distant.

The physical properties of the newly identified object hold no discernible clues about its formation. There are indications the object could be an exoplanet, but no conclusive determinations have been made. Further research will reveal more about this celestial curiosity.