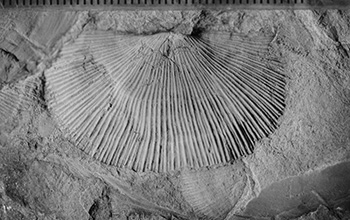 The Late Devonian mass extinction -- roughly 372 million years ago -- was one of five mass extinctions in Earth's history, with roughly 75% of all species disappearing over its course. It happened in two "pulses" spaced about 800,000 years apart, with most of the extinctions happening in the second pulse. However, for one group of animals living in eastern North America, the first pulse dealt the deadlier blow.

Research published in Scientific Reports looks at how and why this group of animals, called brachiopods, seemed to do the opposite of so many other species. What caused this group to hit the accelerator toward extinction?

Brachiopods are small, shelled, filter-feeding ocean dwellers that are abundant and well-preserved in the fossil record, says researcher Jaleigh Pier of Cornell University. These qualities make brachiopods ideal for studying disturbances like mass extinctions from the deep past.

Pier and colleagues collected specimens from several sites near the border of New York and Pennsylvania, which, in the Late Devonian, was a shallow sea.

For the U.S. National Science Foundation-funded study, the researchers identified some 8,000 brachiopod specimens to determine which species were present leading up to this first pulse, and identified the species that were still around after the extinction.

Andrew Bush of the University of Connecticut, the paper's senior author, says it was surprising to discover that the first pulse was more detrimental to the brachiopods.

"We have to compare the samples before and after to get a sense of what survives and what completely disappears and goes extinct," Bush says. "There's selectivity: why do certain things die out and certain things survive? We already know the result, so we have to work backward and see what the lines of evidence indicate about what happened to these species."

To determine temperature tolerance, the researchers looked at different kinds of brachiopods in the Devonian period at different latitudes and their corresponding thermal preferences. There is also the factor of mobility: for instance, as it was getting colder, some animals that were unable to move to warmer environments may have gone extinct.

"From our data, it seems climate change was the primary factor for the Devonian extinction in this part of New York and Pennsylvania," says Pier. "Temperatures were changing, and these brachiopods would have had a hard time moving to a better environment because the area is geographically isolated. For these species, 70% of them were endemic to the region and this reflects that difficulty in migrating."

These broad patterns and concepts from past extinctions can be applied to understanding similar patterns researchers are seeing today, says Pier, where some groups fare well while others die out.