Winter is coming: Researchers uncover a surprising cause of the Little Ice Age 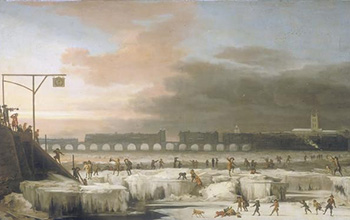 Researchers have found a cause of the Little Ice Age. Here, the frozen River Thames in 1677.

Research by University of Massachusetts Amherst scientists provides a new answer to one of the persistent questions in historical climatology, environmental history and the earth sciences: What caused the Little Ice Age? The answer, we now know, is a paradox: warming.

The Little Ice Age was one of the coldest periods of the past 10,000 years, a period of cooling that was particularly pronounced in the North Atlantic region. This cold spell, whose precise timeline scientists debate, but which seems to have set in around 600 years ago, was responsible for crop failures, famines and pandemics throughout Europe, resulting in misery and death for millions.

To date, the mechanisms that led to this harsh climate state have remained inconclusive. Now, U.S. National Science Foundation-funded research results published in Science Advances give an up-to-date picture of the events that brought about the Little Ice Age. Surprisingly, the cooling appears to have been triggered by an unusually warm episode.

When co-authors Francois Lapointe and Raymond Bradley began carefully examining their 3,000-year reconstruction of North Atlantic sea surface temperatures, they noticed something surprising: a sudden change from very warm conditions in the late 1300s to unprecedented cold conditions in the early 1400s, only 20 years later.

Using detailed marine records, Lapointe and Bradley discovered that there was an abnormally strong northward transfer of warm water in the late 1300s which peaked around 1380. As a result, the waters south of Greenland and the Nordic Seas became much warmer than usual. "No one had recognized this before," said Lapointe.

Normally, there is a transfer of warm water from the tropics to the Arctic. It's a well-known process called the Atlantic Meridional Overturning Circulation, or AMOC, which is like a planetary "conveyor belt." Typically, warm water from the tropics flows north along the coast of Northern Europe, and when it reaches higher latitudes and meets colder Arctic waters, it loses heat and becomes denser, causing the water to sink to the bottom of the ocean. This deep-water formation then flows south along the coast of North America and continues to circulate around the world.

But in the late 1300s the AMOC strengthened significantly, which meant that far more warm water than usual was moving north, resulting in rapid Arctic ice loss. Over the course of a few decades spanning the late 1300s to early 1400s, vast amounts of ice were flushed out into the North Atlantic, which not only cooled the North Atlantic waters, but also diluted their saltiness, ultimately causing the AMOC to collapse. It is this collapse that then triggered a substantial cooling.