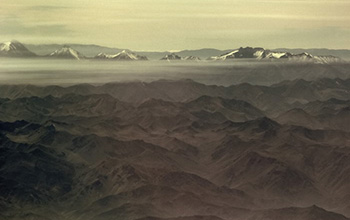 The Atacama Desert as photographed during the study.

When winds loft fine desert dust high into the atmosphere, iodine in the dust can trigger chemical reactions that destroy some air pollution, but it can also let greenhouse gases stick around longer. The finding, published in the journal Science Advances, may lead researchers to reevaluate how particles from land can impact the chemistry of the atmosphere.

"Iodine, the same chemical added as a nutrient to table salt, is eating up ozone in dusty air high in the atmosphere," said Rainer Volkamer, a chemist at the University of Colorado Boulder. Volkamer led a team that made precision atmospheric measurements by aircraft.

The U.S. National Science Foundation-funded finding, he said, has implications for not only air quality, but climate, too -- iodine chemistry can make greenhouse gases stick around longer.

"Our understanding of the iodine cycle is incomplete," Volkamer said. "There are land-based sources and chemistry we didn't know about, which we must now consider."

Atmospheric researchers have long been interested in the observation that dusty layers of air are often very low in the air pollutant ozone, a molecule which, when concentrated, can damage people's lungs and affect crops. It seemed that a dust-surface chemistry was eating up ozone, but no one had been able to show that happening in laboratory experiments.

Others have speculated about it, but there has been a lot of doubt, said Volkamer. By contrast, lab experiments have long shown that a gaseous form of iodine can gobble up ozone -- but there were only hints of a connection between dust and iodine.

"We are only just now beginning to understand how important iodine in the atmosphere can be," said Sylvia Edgerton, a program director in NSF's Division of Atmospheric and Geospace Sciences. "Field research scheduled for this spring will use advanced instrumentation to make some of the first measurements ever of iodine in the upper troposphere-lower stratosphere."