Marine species can cling together to buy time during climate warming 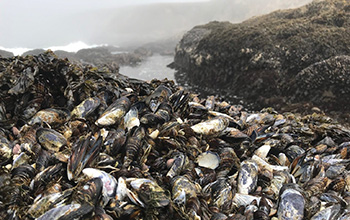 Some marine species can help protect others from climate change by shielding them from heat, according to a new study by Texas A&M University at Galveston and other scientists.

The team studied how tiny crabs and isopods -- marine versions of pill bugs -- that live on rocky shores react to warming of their habitats. The researchers found that the mussel beds these animals live in protect them from temperature swings and keep them from drying out on hot, sunny days.

"These mussel beds provide a sort of 'ecological air conditioning system' in their canopies, just like forests," Jurgens said. "The results show that conserving habitats formed by plants and animals can help buy time for heat-sensitive species, helping them weather the near-term effects of climate change. But it also means that habitat destruction can make other species more vulnerable to climate warming."

The research was conducted near Bodega Bay in northern California.

"These results show another way foundation species, such as mussels along rocky shores, have a huge impact on the wider biological community around them," said Cynthia Suchman, a program director in NSF’s Division of Ocean Sciences.

Jurgens said without the protection of mussel beds, some marine species cannot survive under present-day conditions.

"But they can tolerate a worse-case climate scenario for perhaps as long as the year 2099 as long as the mussel bed environment remains intact," she said. "This research shows that it's important to protect vulnerable habitats like mussel beds, which are threatened by trampling and destructive recreational harvests of mussels in many coastal areas of the U.S."

The study was funded by the U.S. National Science Foundation.