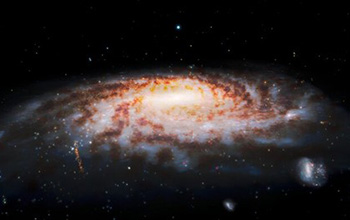 A team of astronomers, partially supported by the U.S. National Science Foundation, discovered an unusual stellar stream orbiting the Milky Way. A stellar stream is a cluster of stars that have been torn and stretched into streams that stretch along their original orbit.

The stellar stream, named C-19, is expansive but not visible to the naked eye. The stellar stream's existence is evidence that globular clusters (dense groups of old stars) and other entities in the early Milky Way were able to form in extremely low-metal environments. The discovery offers new insight into the formation of stars, star clusters, and galaxies in the early universe. The team published its findings in the journal Nature.

Using a fiberoptic link between the GRACES spectrograph installed at the Canada-France-Hawaii Telescope and the mirrors of the Gemini North telescope -- part of the Gemini Observatory, a program of NSF's NOIRLab -- the team discovered that C-19 is actually remnants of an ancient globular cluster. The astronomers found that C-19 has a lower proportion of heavy elements than other known galactic stellar systems.

The data indicate that the stars in the stream were once part of a star cluster and formed in the early days of the Milky Way. The revelations could provide more information about the formation of the first stars and star clusters shortly after the Big Bang.

"This international collaboration reveals startling new insights into the structure, evolution and formation of our galaxy," said Martin Still, Gemini program director at NSF. "The Gemini observatories continue to demonstrate key advances in the understanding of our night sky, the cosmic ecosystem and our own place in the universe."