Scientists document the onset and ending of an abnormal blooming season 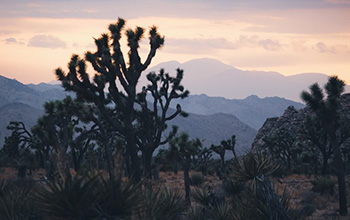 Joshua trees and a Mojave yucca at dusk; climate change is affecting the plants' flowering times.

In November 2019, visitors to Joshua Tree National Park in California encountered a strange sight. Joshua trees and the closely related Mojave yuccas, which normally remain reproductively dormant until late spring, were in full bloom at the tail end of autumn.

In a new study published in Scientific Reports, U.S. National Science Foundation-funded researchers at the Florida Museum of Natural History used citizen science data to determine the cause of the anomalous bloom and predict when similar events might occur.

"The findings highlight the importance of investments in citizen science, and the use of data generated by iNaturalist, the Global Biodiversity Information Facility and other efforts, to inform research that is timely and relevant," said Roland Roberts, a program director in NSF's Division of Biological Infrastructure.

As climate change alters weather and environmental patterns, plants respond by producing leaves and flowers earlier in the year, losing them later and shifting their ranges. Monitoring and understanding these large-scale patterns is a lot like taking the planet's pulse.

"It helps us understand what drives flowering time and how that might be impacted by future climate change," said lead author Laura Brenskelle. "The whole duration for plants that bloom in warmer weather is getting longer. It's climate change that you can see."

Little is known about which environmental conditions trigger flowering in Joshua trees, Yucca brevifolia, and Mojave yuccas, Yucca schidigera. But with the advent of citizen science platforms like iNaturalist, scientists have unlimited access to increasingly larger amounts of data that allow them to study global biodiversity patterns, for which Joshua trees are especially well-suited.

Every year, Joshua trees produce succulent clusters of milky white flowers arranged in rosettes. Resembling pagodas and measuring more than a foot long, the clusters are easy to spot from a distance. As a result, thousands of photos were uploaded to iNaturalist that documented the onset and ending of the abnormal blooming season.

Scientists warn that Joshua trees may have already started down the path toward extinction. Biologists have noted the establishment of fewer juvenile plants and millions of tree mortalities due to droughts and wildfires. If the current rate of global temperature change continues, Joshua trees may disappear from up to 90% of their current range by the turn of the century.

With continued climate change, the researchers worry that unseasonal blooms like the one in 2019 will no longer be out of the ordinary. It's likely, the scientists say, that these anomalies are not one-offs that happen once in a blue moon.