When water is coming from all sides 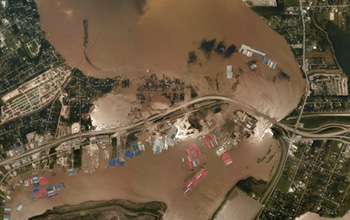 In 2017, Hurricane Harvey drove flooding of inland and coastal areas in and around Houston, Texas.

When Hurricane Harvey and Hurricane Florence hit in 2017 and 2018, it was not solely the storm surge from the Gulf of Mexico and Atlantic Ocean that led to flooding. Inland sources, like rain-swollen rivers, lakes and suburban culverts, also contributed significantly. These factors were missed by many computer models at the time, which underestimated the flood risk.

"People don't care as much about whether flooding is coming from the river or the ocean, especially when both contribute to water levels,'" said Edward Myers of the U.S. National Oceanic and Atmospheric Administration.

Myers and his colleagues are collaborating with Y. Joseph Zhang at the Virginia Institute of Marine Science to develop and test the world's first 3D operational storm surge model. The research is supported by the U.S. National Science Foundation. The results were published in Natural Hazards and Earth System Sciences.

Zhang has been focusing on hindcasts -- a way of testing a mathematical model by inputting estimates from past events and seeing how well the model output matches the known results. Zhang and collaborators conducted a study of compound flooding during Hurricane Florence, which impacted a large swath of North Carolina in September 2018. The research found that barrier islands played an important role in compound surges.

"Compound surge and flooding are worldwide hazards," Zhang said. "They're notoriously challenging, especially in the transition zone where the river meets the sea. Lots of factors come into play and interact."

Surrounding the hydrodynamic core of SCHISM are numerous modules that simulate other phenomena important to flooding. These include air-sea exchange, vegetation and sediment. Other modules adapt the system for specific events, like oil spills, or predict conditions, like water quality.

Unlike other coupled inland-coastal flooding models, SCHISM incorporates fine-scale features, like engineered structures, culverts, and narrow gates, into its forecasts.

"We see the SCHISM model as a candidate for what we want to do in terms of linking models," Myers said. "It handles very fine scales very well, and we can run it efficiently. It requires high performance computing, which is why the Texas Advanced Computing Center has been instrumental."

Zhang started using the Texas Advanced Computing Center, or TACC, systems in 2010. "Since then, TACC's HPC resources and facilities have greatly improved," he said. "The size of the problem we can tackle has dramatically improved. We've gotten into uncharted territory. TACC has been continuously pushing the limits."