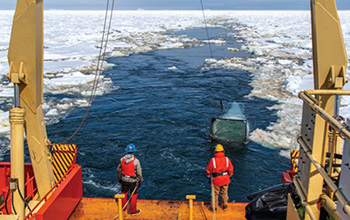 Researchers at the Palmer LTER site conduct a net tow from the icebreaker Laurence M. Gould.

A long-term study in the Southern Ocean reveals a correlation among warming waters, decreased sea ice and reduced abundance of Antarctic silverfish. These small fish are important prey for penguins, seals and other marine life.

The study was published in the journal Communications Biology. Lead author Andrew Corso of the Virginia Institute of Marine Science says, "This is the first statistically significant relationship reported between sea ice and the long-term abundance of any Antarctic fish species. With continued regional warming, these fish could disappear from the region entirely, triggering major changes in the marine ecosystem."

Co-authors on the study are Deborah Steinberg and Eric Hilton of VIMS, along with Sharon Stammerjohn at the University of Colorado Boulder.

The study is based on an analysis of more than 7,000 larval fish specimens collected over 25 years (1993–2017) as part of the NSF-funded Palmer Long-Term Ecological Research program. The Palmer LTER is an ongoing investigation of the effects of climate change on the ocean food web along the west coast of the Antarctic Peninsula.

"The West Antarctic Peninsula is one of the fastest-warming areas on Earth, so studies there are important to helping us understand the ecosystem's response to change," says Karla Heidelberg, a program director in NSF's Office of Polar Programs.

Steinberg adds that "the study area is one of the most rapidly warming regions on Earth, with increases in air and water temperatures leading to substantial reductions in sea-ice coverage over the last half century." From 1945 to 2009, the mean winter air temperature in the region rose by 10.8 degrees Fahrenheit (6 degrees Celsius), while the annual duration of sea ice decreased by almost two months.