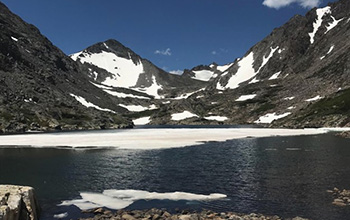 Lake ice cover in Green Lakes Valley, Colorado, has decreased by 24 days since 1983.

Mountain lakes provide freshwater for roughly half the world's population. Yet a shifting climate could impact the reliability of this resource by altering the temperature patterns that govern lake conditions and influence lake biota.

Lake ice phenology, or the timing of lake ice cover, tell researchers how a lake is responding to climate shifts. But long-term data sets are necessary to track slow, imperceptible changes in alpine systems, scientists say.

That translates to 20% more open water time and represents an annual rate of ice cover loss that is approximately 50% faster than the Northern Hemisphere average. The results are published in Limnology and Oceanography Letters.

"One of our ideas is the 'extended summer,'" says Kyle Christianson of the University of Colorado Boulder and lead author of the study. "There's an earlier start to melting in the spring and later start to ice in the fall. A small increase in the extension of the open water season increases primary productivity, with far-reaching ecological implications."

Alpine lakes are not isolated systems; changes in these lakes likely indicate watershed-level changes, too. "The extended summer has led to terrestrial vegetation increases and some vertical movement of tree species, contributing to watershed-level shifts," says Christianson.

Lake ice has been studied in Green Lakes Valley at the Niwot Ridge LTER site for 51 years, the longest-running high elevation dataset on lake ice globally. Christianson and collaborators studied five of the seven Green Lakes Valley lakes. They focused on a 36-year window in the data where all five lakes had continuous recordings of ice clearance and formation.