Permafrost at high elevations is more vulnerable than Arctic permafrost 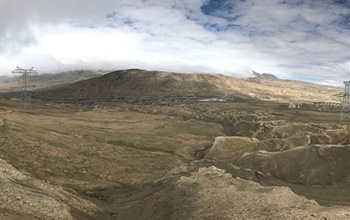 From the ancient sludge of lakebeds in Asia's Tibetan Plateau, scientists can decipher a vision of Earth's future. That future, it turns out, may look very similar to the mid-Pliocene warm period -- an epoch 3.3 million to 3 million years ago when the average air temperature at mid-latitudes rarely dropped below freezing.

It was a time when permanent ice was just beginning to cling to the northern polar regions, and mid-latitude alpine permafrost -- or perpetually frozen soil -- was much more limited than it is today.

Alpine permafrost is expected to melt at a faster rate than Arctic permafrost under current global warming conditions, according to research published in Nature Communications. The U.S. National Science Foundation-supported study shows that melting of alpine permafrost may contribute significantly to rising global temperatures.

The Tibetan Plateau, which sits at an elevation of more than 15,400 feet, is the largest alpine permafrost region on Earth, but others can be found in the Mongolian Plateau in central Asia, the Canadian and U.S. Rocky Mountains, the southern stretches of the Andes, and other mountain ranges worldwide at elevations where the air temperature is consistently below freezing.

Models developed by scientists at the University of Arizona and other institutions suggest that under current levels of atmospheric carbon dioxide, 20% of Arctic permafrost land area and 60% of alpine permafrost land area will be lost in the future. High altitude alpine regions are more sensitive than high latitude Arctic regions to warming under higher atmospheric carbon dioxide conditions.