To cut costs, Weddell seal pups keep swimming when trading in their fluff 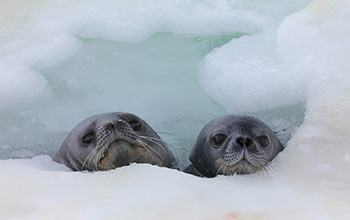 A Weddell seal pup (right) with its mother (left) in a breathing hole in Antarctic ice.

Open water swimming is not for the fainthearted, especially when air and water temperatures are frigid. So how do furry Weddell seal pups born on the Antarctic sea ice keep on swimming?

Although their blanket of fluffy insulation works fine when dry, as soon as the pups plunge into the sub-zero waters, all benefits are lost. The youngsters can take to the water, learning to swim and dive, as early as 2 days old. How do the pups cope when they shed their fur, relying instead on their developing blubber stores for insulation? Researchers recently published new U.S. National Science Foundation-supported findings in the Journal of Experimental Biology.

"Weddell seals are the southernmost breeding population of mammals in the world," says Karla Heidelberg, a program director in NSF's Office of Polar Programs. "These researchers are providing new information that's changing how we view the life histories and physiological differences among these seals and other seal populations that live farther north in warmer regions of Antarctica."

Cal Poly, San Luis Obispo, researchers Linnea Pearson, Emma Weitzner, Lars Tomanek and Heather Liwanag headed south to McMurdo Station in Antarctica -- close to a colony of Weddell seals -- to monitor newborn pups through their first weeks of life. The scientists aimed to understand how pups stay warm on ice and in water, and whether older pups with more blubber use less energy to stay warm.

"Weddell seals are relatively calm, which makes working with them easier," said Pearson, who weighed and measured the pups while noting the condition of their fur as they molted over a seven-week period. The team also placed the pups inside a custom-built plastic chamber to measure their oxygen consumption when on the ice.

In addition, the team tracked how often and for how long each pup went for a dip by tagging their hind flippers. The scientists found that as the pups grew, their metabolic rates increased. However, when immersed in water, the 3- and 7-week-old pups had similar metabolic rates.

The researchers compared how much time the youngsters spent in the water before, during and after molting, and were astonished that the molting pups spent three times more effort swimming before than after the molt, even though they expended more energy to remain warm in the water.

The researchers suspect that the swimming and diving experience they gained while molting may set up the youngsters for a life of self-sufficiency when finally abandoned by their mothers.