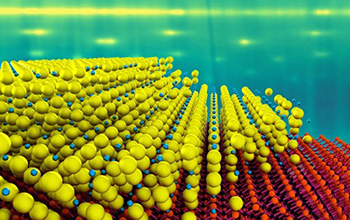 Photocathodes emit electrons when illuminated and are a vital component of particle accelerators. But the potential of photocathodes is limited by the properties of crystalline. That is, until a team of U.S. National Science Foundation-grantee researchers at Cornell University's Center for Bright Beams set out to develop a high-efficiency photocathode.

The team created a single-crystal alkali antimonide photocathode with an efficiency up to 10 times higher than conventional photocathodes.

Photocathodes made from alkali antimonide materials are unable to reach full capacity due to poor crystalline structure, scientists have found, resulting in surface roughness, degradation of the emitted beam quality and accelerator performance.

While the ingredients in the new photocathodes contain the same atomic ingredients as existing photocathodes, the team grew the materials as a single crystal with a thickness of just 4 nanometers –- almost 10 times thinner than existing materials, with a 10 times faster response rate.

"These electron source materials have been around since the days of Einstein," said Jared Maxson, corresponding author of the study. "His Nobel Prize-winning work describes the photoelectric effect these sources utilize. They are extremely efficient and make a lot of electrons, but at the atomic level, they are completely disordered, which we know limits their performance."

To increase the photocathode surface and maintain the order of the electrons, the team used a special system to deposit a single-crystal 4 nanometer thick layer of cesium antimonide onto a substrate of silicon carbide.

One application of the new photocathode technology is development of ultra-fast electron diffraction systems with unprecedented spatial and temporal resolution for materials characterization, researchers believe.

"A lot of the new materials that are being explored can only be made at the single micron scale," said Maxson. "We cram our beam into a small spatial scale to unlock the ability to view these materials with time-resolved electron diffraction."