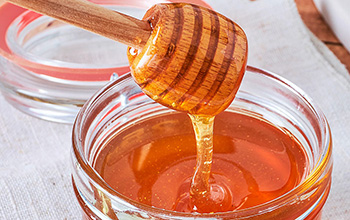 Engineers use honey to make neuromorphic memristors that imitate the human brain.

Engineers at Washington State University, supported by a grant from the U.S. National Science Foundation, used honey to make components for computer systems that mimic neurons and synapses of the human brain, known as neuromorphic computers.

The engineers recently published results of a study detailing their method of using honey to make memristors, a component similar to a transistor that processes and stores data.

"This is a small device with a simple structure, but it has similar functionalities to a human neuron," said Feng Zhao, corresponding author of the study. "That means if we can integrate millions or billions of these honey memristors together, then they can be made into a neuromorphic system that functions much like a human brain."

Neuromorphic chips with the equivalent of more than 100 million synthetic neurons per chip exist but have just a fraction of neurons found in the human brain and number in the billions, with more than 1,000 trillion synapses.

The engineers created memristors by putting honey processed into a solid form between two metal electrodes. The engineers tested the memristors’ capacity to imitate human synapses and found the synthetic synapse emulated functions of its human counterpart, including processing and retaining information.

The engineers created the honey memristors on a micro-scale, about the size of a human hair. Developing the memristor on a nanoscale and bundling millions or billions of memristors could lead to a scalable and sustainable neuromorphic computing system.

"Honey does not spoil," Zhao said. "It has a very low moisture concentration, so bacteria cannot survive in it. These computer chips will be stable and reliable for a long time.

"When we want to dispose of devices using computer chips made of honey, we can easily dissolve them in water. Because of these special properties, honey is very useful for creating renewable and biodegradable neuromorphic systems."