Researchers study shallow-water hydrothermal systems and the production of microbes 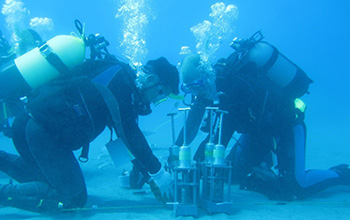 Scientists remove an incubation device used to measure the activities of chemosynthetic microbes.

Most visitors to Paliochori Beach on the Greek island Milos may not be aware of the bay's shallow-water hydrothermal community, a veritable "Greek salad" of microbes, that is within snorkeling distance from the shoreline.

The hydrothermalism in the coastal sediments of Paliochori Bay strongly affects biogeochemical processes and supports chemosynthesis that allows certain microorganisms such as sulfur-oxidizing bacteria to use chemical energy rather than light, as photosynthetic plants or algae do, to convert carbon dioxide into cell material.

However, the impact of fluid flow on the composition of the microbial community and the rates of chemosynthetic production have been unknown because it is challenging to measure microbial processes under natural conditions, particularly in hydrothermal systems.

A U.S. National Science Foundation-supported team is using an innovative approach to examine the bay's shallow-water hydrothermal system and the production of microbes  there in situ and near natural conditions as a model to assess the importance of hydrothermal fluid circulation on chemosynthesis.

"This shallow-water system serves as a model for much more extensive and difficult to reach deep sea hydrothermal vent ecosystems," said Mike Sieracki, a program director in NSF's Division of Ocean Sciences.

Co-lead author Stefan Sievert at the Woods Hole Oceanographic Institution added, "The study shows how productive the shallow-water hydrothermal vents actually are and how quickly the microbes adapt to changing conditions."