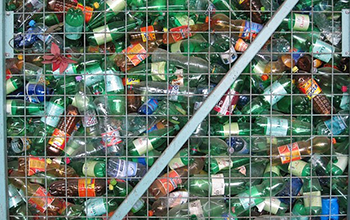 Chemists use a simple method to convert water bottles into basic components that can be repurposed.

Discarded plastic bottles abound. Simple and effective methods to recycle, repurpose or reuse the omnipresent debris do not. Chemists at Northwestern University, partially supported by the U.S. National Science Foundation, have demonstrated that a new material referred to as a metal-organic framework -- or MOF -- can function as a stable and selective catalyst for breaking down polyester-based plastic into terephthalic acid, a chemical used in manufacturing. The method requires nothing more than the plastic debris, hydrogen and the MOF catalyst.

"We can do a lot better than starting from scratch when making plastic bottles," said Omar Farha, corresponding author of the study. "Our process is much cleaner."

The chemists severed an ester bond to degrade polyethylene terephthalate, a pervasive consumer plastic. The researchers chose a simple to manufacture zirconium-based MOF called UiO-66 because it is scalable and inexpensive. The catalyst was applied to discarded water bottles that were chopped into pieces and heated.

"The MOF performed even better than we anticipated," Farha said. "We found the catalyst to be very selective and robust. Neither the color of the plastic bottle nor the different plastic the bottle caps were made from affected the efficiency of the catalyst. And the method doesn't require organic solvents, which is a plus.”

Scientists have been using zirconium MOFs to degrade nerve agents for years. The team then wondered if these MOFs could also degrade plastic even though the reactions and mechanism are different. That curiosity led to the recent findings.

Farha said that “the research helps address long-standing challenges associated with plastic waste and opens up new areas and applications for MOFs."