Chemists harness the power of the sun to upcycle plastic waste

Light, oxygen and a catalyst convert polystyrene into benzoic acid 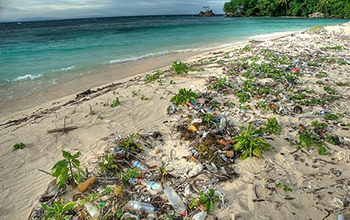 Chemists use the sun's power and a little help to upcycle plastic waste.

Polystyrene winds up in landfills and makes up about a third of landfill waste across the globe. A team of chemists at Cornell University, partially supported by a grant from the U.S. National Science Foundation, has created a climate-friendly process to upcycle polystyrene. The scalable process can withstand commercial dyes, dirt and other plastics.

"In terms of plastic production and end-of-life waste streams, we are on the road to an unsustainable future," said Erin Stache, co-author of the study.

The team used catalyst-controlled photooxidation to take one step toward making that unsustainable future a little more sustainable. The process uses light, oxygen and an iron-based catalyst to convert polystyrene into benzoic acid. The method is effective on polystyrene of every form and texture and can take place in an oxygen-rich environment using a light-emitting diode, or outdoors and exposed to direct sunlight.

Stache said that "the advantage of using light is you can get control over the chemical process based on some of the catalysts we've developed to harness the white light. If we can use sunlight to drive the process, that's a win-win.

"These results signify that our system could efficiently break down commercial samples of polystyrene, even with additional composite and insoluble material."

The team assessed scalability by setting up the breakdown process on a larger scale and found that the efficacy was similar to that of smaller batches.

Stache added that "if we can make the process even more efficient, we can think about how to commercialize it and use it to address waste streams."