More than 1 in 5 reptile species are threatened with extinction

But many likely benefit from efforts to save other animals 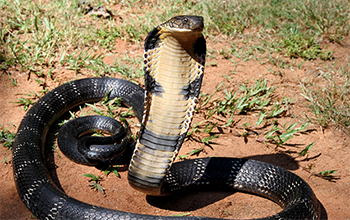 More than one in five reptile species are threatened with extinction.

Conservation efforts for other animals have likely helped protect many reptile species, according to a new study led by scientists at NatureServe and other organizations. The study, published in the journal Nature, presents an analysis of the first comprehensive extinction risk assessment for reptiles on the International Union for Conservation of Nature Red List of Threatened Species. It found that at least 21% of all reptile species globally are threatened with extinction.

"The potential loss of one-fifth of all reptile species reminds us how much of Earth's biodiversity is disappearing, a crisis that is threatening all species, including humans," said Maureen Kearney, a program director in the U.S. National Science Foundation Division of Environmental Biology, which supported the study.

A research team representing 24 countries across six continents analyzed the conservation needs of 10,196 reptile species in comparison with mammals, birds and amphibians. Reptiles in the study include turtles, crocodiles, lizards, snakes and tuatara, the only living member of a lineage that evolved in the Triassic period approximately 200-250 million years ago.

The research revealed that efforts to conserve threatened mammals, birds and amphibians are more likely than expected to co-benefit many threatened reptiles. Although reptiles inhabit arid habitats such as deserts and scrubland, most reptile species occur in forested habitats, where they -- and other vertebrate groups -- suffer from threats such as logging and conversion of forest to agriculture.

The study found that 30% of forest-dwelling reptiles are at risk of extinction, compared with 14% of reptiles in arid habitats.

The study also highlighted what we stand to lose if we fail to protect reptiles. If each of the 1,829 threatened reptiles became extinct, Earth would lose a combined 15.6 billion years of evolutionary history -- including countless adaptations for living in diverse environments.

The authors note that urgent, targeted conservation measures are still necessary to protect some of the most threatened reptile species, especially island endemic lizards threatened by introduced predators and those that are more directly impacted by humans. For example, hunting, rather than habitat modification, is the main threat to turtles and crocodiles, half of which are at risk of extinction.