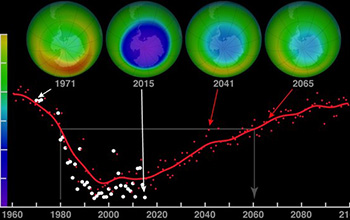 An international agreement to protect the ozone layer is expected to prevent an estimated 443 million cases of skin cancer and 63 million cases of cataracts for people born in the United States through the end of this century, according to new research.

The study, by scientists at the National Center for Atmospheric Research and other institutions, focused on the far-reaching impacts of a 1987 treaty known as the Montreal Protocol, including later amendments that strengthened it. The agreement phased out the use of chemicals such as chlorofluorocarbons, also known as CFCs, that destroy ozone in the stratosphere.

The study was published in ACS Earth and Space Chemistry. NCAR is sponsored by the U.S. National Science Foundation.

The scientists developed a computer modeling approach that enabled them to look at both the past and the future by simulating the treaty's impact on Americans born between 1890 and 2100. The model revealed the treaty's effect on stratospheric ozone, the associated reductions in ultraviolet radiation, and the resulting health benefits.

In addition to the number of skin cancer and cataract cases that will be prevented, the study also showed that the treaty, as most recently amended, will prevent approximately 2.3 million skin cancer deaths in the U.S.

"It's very encouraging," said NCAR scientist Julia Lee-Taylor, a co-author of the study. "It shows that, given the will, the nations of the world can come together to solve global environmental problems."