Asteroid could be a remnant of an ill-fated protoplanet 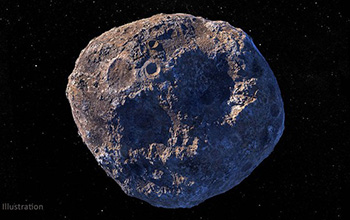 Illustration of the asteroid Psyche in partial darkness

Researchers at the California Institute of Technology participating in a program supported by the U.S. National Science Foundation examined millimeter-wavelength light emissions from the asteroid Psyche to learn more about its origin and surface. The findings, published in The Planetary Science Journal, offer new insights into surface properties of the asteroid and its mysterious origins. Some researchers speculate the asteroid could be a remnant of an ill-fated protoplanet.

Psyche orbits the sun in the Asteroid Belt, a round and hollow region of the Milky Way that is home to more than a million cosmic entities ranging in size from small to enormous. The largest of the M-Type asteroids -- metal-rich asteroids that could be fragments of proto planets -- Psyche has a diameter greater than 200 kilometers, or around 125 miles.

Thermal observations measure the light emitted by an object, not the light that the object reflects. Gathering surface data from viewing locations multiple times over the course of the day adds more detailed data and an interpretation of the object’s landscape that is less ambiguous and more reliable.

Scientists chose the Atacama Large Millimeter/submillimeter Array, or ALMA, in Chile to capture Psyche’s emissions. Radio telescopes were used to generate an image of the asteroid of about 50 pixels. Achieving that resolution was possible because ALMA observed Psyche at millimeter wavelengths that are longer than infrared wavelengths, allowing researchers to combine data from all the telescopes and produce higher resolution images.

The data indicated that Psyche's thermal inertia -- the amount of time it takes an object to heat up when it receives light from the sun and how fast it cools down when darkness descends -- is above normal for an asteroid, which could mean that Psyche has an uncommonly dense or conductive surface. Psyche emits scattered light, and it is very likely that rocks on the surface of the asteroid are sprinkled with grains of metallic materials. The data indicates Psyche's surface is at least 30% metal.

The findings give weight to alternative explanations for Psyche's surface composition, including the theory that Psyche could be a primitive asteroid that was formed closer to the sun and not part of the core of a fragmented protoplanet. The techniques used in this study yielded new insights into the surface composition and origin of asteroids and established new ways to study large objects in the Asteroid Belt.