Arctic rotifers still alive after 24,000 years in a frozen state 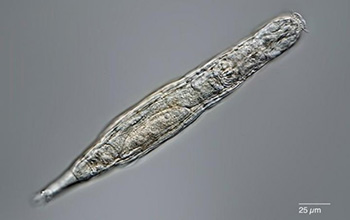 Rotifers can live for at least 24,000 years in Siberian permafrost.

Bdelloid rotifers are multicellular animals, so small a microscope is needed to see them. Despite their size, they're known for being tough -- capable of surviving drying, freezing, starvation and low oxygen.

Now, U.S. National Science Foundation-funded researchers have found that not only can they withstand being frozen, they can persist for at least 24,000 years in Siberian permafrost.

"It's hard for most of us to imagine an animal staying alive for 24,000 years," said Doug Levey, a program director in NSF's Division of Environmental Biology. "This study shows that life exists practically everywhere on Earth, and that exciting discoveries about it are boundless."

To collect samples, scientists used a drilling rig in some of the most remote Arctic locations.

Researchers have identified many long-lived single-celled microbes. Mosses and some plants have also been regenerated after many thousands of years trapped in ice. The team has added rotifers to the list of organisms with a remarkable ability to survive, seemingly indefinitely, in a state of suspended animation beneath the frozen landscape.

Rotifers had been reported to survive up to 10 years when frozen, based on earlier evidence. In the new study, published in Current Biology, the researchers used radiocarbon-dating to determine that the rotifers they recovered from the permafrost were about 24,000 years old.

Once thawed, the rotifer, which belongs to the genus Adineta, reproduced in a clonal process known as parthenogenesis. To mimic the process of freezing and recovery of the ancient rotifer, the researchers froze and then thawed dozens of rotifers in the lab.

The study showed that rotifers could withstand the formation of ice crystals during slow freezing. It suggests that they have some mechanism to shield their cells and organs from harm at exceedingly low temperatures.

It's still not clear what it takes to survive in ice for a few years -- and whether the leap to thousands of years makes much difference. That question requires further study, the researchers said. They'll continue exploring the Arctic in search of other organisms capable of such long-term cryptobiosis.

They hope to learn more about the biological mechanisms that allow the rotifers to survive. Insights from these tiny animals offer clues to better cryopreserve the cells, tissues and organs of other animals, including humans.