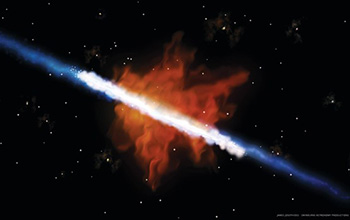 Astronomers at the University of California, San Diego have learned more about what exhaust from galaxies is composed of and how galactic emissions are ‘recycled.’ The information will help astronomers understand more about how galaxies form stars and the forces that influence the composition, behavior and longevity of galaxies.

In its life cycle, a star creates and releases materials that later play a role in how galaxies and stars are formed. U.S. National Science Foundation-funded scientists captured images of galactic inflow and outflow to measure the scope and state of the gases absorbed when stars are born and released when stars burn out, usually in the form of supernovas.

Among their findings published in The Astrophysical Journal Letters, the researchers noted that when a star explodes and creates a supernova, the outflow is emitted from both ends of the star and is made up of gases that contain fragments of the star's core. The researchers were able to accurately identify materials in the interstellar emissions and confirmed the presence of carbon, hydrogen, iron and other elements. These materials are pushed out into the universe in ejected gases after a star collapses, seeding future asteroids, planets and stars.

Using the NSF-supported Keck Cosmic Imager, a recent advancement in imaging technology, the research team examined the composition of a galaxy named Markarian 1486. This endeavor marks the first time scientists have observed and documented a galactic life cycle outside the Milky Way.