Each year NSF enables a select group of artists to visit Antarctica. Norbert Wu, a world-renowned photographer and cinematographer, returned with new views of an otherworldly realm in his spectacular high definition film, "Under Antarctic Ice." 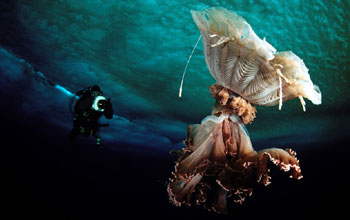 A diver from Norbert Wu's Antarctic team takes aim at a cooperative medusa swimming beneath the ice.

Norbert Wu is an overachieving marine photographer. Among many accomplishments, he has served as chief still photographer aboard Jacques Cousteau's Calypso and filmed great white sharks for PBS. When he set out to make an underwater documentary of Antarctica, he knew what to expect.

"It's a cliché, but Antarctica is the coldest, windiest, harshest and most remote continent in the world. It's like getting out on another planet," Wu reports on his Web site. On his earlier visits to Antarctica, he concentrated on still photography. Taking high definition video cameras under the ice was a different story.

Wu's base of operations was McMurdo Station, an outpost on Ross Island, near a continent that is 50 percent larger than the United States. During the southern hemisphere's summer (austral summer), the population of NSF-funded scientists and support personnel at McMurdo may exceed 1,000 people. In the austral fall and winter (from February to late October), the population drops to roughly 180 persons. McMurdo, the logistics hub of NSF's U.S. Antarctic Program, is adjacent to grounded icebergs and other prime diving spots. But actually getting wet in Antarctica is a complicated process.

Part of the challenge is logistics. The solution: NSF's Antarctic Artists and Writers Program, which supplied operational support for Norbert Wu's video project. The operation required air service to and from Antarctica, a helicopter for aerial filming, a tank-like vehicle called a Spryte, a heated diving hut for field operations--plus room, board and assorted cold-weather gear. NSF also provided the assistance of Rob Robbins, McMurdo's veteran scientific diving coordinator, who prepped the project's divers for Antarctic conditions, recommended dive sites and sometimes joined the team underwater.

Like astronauts on a space walk, Wu and company suited up for an extreme environment--donning double layers of underwear and a dry suit, booties, gloves and insulated hoods. Only the divers' lips were exposed to the frigid water. But unlike astronauts, Wu's team also faced the prospect of severe winds and shifting weather when they returned to the surface.

"The underwater part of things is not really as harsh as you might think," says Wu. "You might come out on land it may be negative 40 degrees Fahrenheit and things will instantly freeze; your dry suit freezes up so you can barely move. But once you are underwater, since water can only get so cold before it freezes, it stays around 28 degrees Fahrenheit."

Wu visited the continent in 1997, 1999 and 2000--scheduling his dives from October through December, the best months for filming under the ice. Antarctic waters are the clearest in the world, with visibility sometimes approaching a quarter mile. But as the summer season progresses into January and February, plankton blooms begin to reduce the divers' visibility.

Wu's timing paid off: His remarkably clear video records penguins cruising underwater, large Weddell seals and seal pups, a pod of killer whales and a shallow-water fish (Pagothenia borchgrevinki) that makes its own antifreeze. Many of the creatures that appear in "Under Antarctic Ice"--including sea spiders, urchins, long-armed seastars and sponges -- have evolved in isolation on the Antarctic seafloor, growing larger and living longer than their warm-water relatives.

Where the ice was thin, Wu and his team entered the water through breathing holes used by Weddell seals. On one exceptional dive, Wu slipped through a seal hole, descended to the base of an iceberg, and found rock underneath. The berg had crashed into an underwater pinnacle and was stuck, like a ship run aground on a reef. Crashing bergs tend to churn up the bottom, stimulating diversity among the creatures there, according to scientists.

For many of their 150 dives, the team drove to promising sites in the lumbering Spryte and then drilled a hole through six feet of ice. With sunlight streaming through the dive hole, Wu discovered some practical and artistic differences between high definition video and film.

"People have been filming in Antarctica for many years, but no one has ever used HDTV technology there to this extent," says Wu. High definition video gave him the capability to shoot for 40 minutes at a time, compared to using 16mm film cameras, which have to be reloaded after about 12 minutes of use.

The technology also gave Wu the opportunity to work in new ways: "I am a film guy. I am not used to zooms underwater. The Fujinon lenses offered great depth of field and a fast lens in low light conditions. I was very happy with their speed and sharpness, and I liked being able to zoom. I am a video guy now," he says.

Norbert Wu's NSF support enabled a unique form of science communication by putting a talented artist using the latest video technology in a position to reveal one of the few unexplored places left on Earth. The resulting documentary, "Under Antarctic Ice," first aired in 2001 on Thirteen/WNET New York's Nature (SM) series on PBS.