A relationship with your vacuum cleaner? Robotic vacuums are warming their way into homes and even taking on a personality for some families. 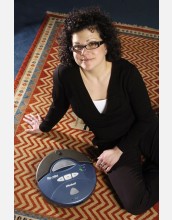 Scrutinizing the relationships people form with their vacuum cleaners seems a peculiar endeavor. But when the researcher is Jodi Forlizzi, who studies human-robot interaction, and the appliance is the Roomba® robotic vac, it makes perfect sense.

Roomba is, after all, one of the first consumer robots that can do real work in the home, rather than just entertain, said Forlizzi, an assistant professor of human-computer interaction and design at Carnegie Mellon University in Pittsburgh.

So when a woman bumps into her disk-shaped robot and says, "Excuse me," or when a family names its vac "Robby," that begins to tell you something about how people will adopt future robotic systems and how that might affect their design and function.

With iRobot Corp. reporting sales of more than 2 million Roombas, the robotic vac is more than a curiosity. Users have even established Roomba Web sites and Yahoo discussion groups.

As part of a National Science Foundation-sponsored study to explore the social impact of robots, Forlizzi selected six families in Pittsburgh and Harrisburg and gave them either Roombas or a handheld stick vacuums with similar cleaning capacities. She asked family members to keep diaries, take photos and check in with researchers periodically over the course of a year.

"The surprising thing to me was how much the Roomba changed the way that people cleaned," said Forlizzi, who presented her findings at the Human-Robot Interaction conference in Washington, D.C. in March.

The robot changed who did the cleaning, involving more men and more younger members of the families, often working in pairs. It changed styles of cleaning, as older women abandoned traditional planned cleaning times for an opportunistic approach, while younger people found themselves cleaning more frequently. Roomba even changed how people kept their homes, with some deciding that having an automated vac that could clean underneath furniture was worth the extra effort to keep clutter off the floors.

The 13-year-old daughter in one family almost literally adopted the Roomba, gradually "taking over" the vacuum and eventually moving it permanently to her bedroom. "For the first time ever," her mother reported, "she is responsible for cleaning her own room every week without being nagged."

Not everyone was impressed by the Roomba's cleaning ability, Forlizzi found, and a family in an older home with lots of fringed floor rugs concluded "this robot was not designed for this kind of house." But most kept using it. One 80-something couple ended up buying a second Roomba for their second floor. And even the family with the older home finally decided it was fitting that they were the first on their block to own a robot because the husband was unusually tech-minded.

The stick vac didn't impress anyone with its cleaning ability either, with one user noting it was designed for "people who don't really clean much." Unlike the Roomba, however, the stick vac didn't change anyone's routine. Given that both vacuums had similar cleaning capabilities, the Roomba's autonomous, semi-intelligent features likely accounted for its greater impact, Forlizzi said.

Part of the family

In addition to naming their Roombas, some admitted they talked to the robot as it worked. "We named it because it has a personality," explained one woman, who called hers Manuel. "I mean, well, it's doing the work of a person may be part of it and it seems to be sort of intelligent, has a little bit of intelligence to it."

All of the families also paid close attention to how their pets reacted to the Roomba, attributing social and emotional responses to the pets. One family said their cat liked to sit near the vacuum "to keep it company," while another thought their geriatric dog was scared of it.

With such a small sample of families, it is impossible to make generalizations about the findings. But Forlizzi said this type of ethnographic study is commonly used in the design field to develop new theories and determine new directions for future research.

"We're looking for thematic concepts," said Forlizzi, who studied illustration as an undergraduate but later "developed the teeth to do this kind of research" after earning a master's degree in interactive design at Carnegie Mellon and working for a product design firm. "The key is to let people talk. In that way, you see what people value."

And sometimes what people value can be surprising. As robots that charge themselves between use become more common, many families may well yearn for the same thing that Forlizzi's subjects did: a closet with an electrical outlet.