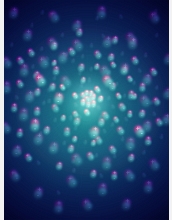 Researchers developed a new technique for creating a gas of ultracold polar molecules.

Physicists Deborah Jin and Jun Ye, along with their colleagues at JILA, a joint institute of the University of Colorado at Boulder and NIST, have published results of a new technique they developed for creating a gas of ultracold polar molecules. Ultracold means the molecules are a tiny fraction of a degree above absolute zero (- 459.67 degrees Fahrenheit), the temperature at which an ideal gas would exert no outward pressure.

Both Jin and Ye are NIST Fellows and adjunct professors of physics at the university, leading a team of students and postdocs in the research. Starting with ultracold gases made of potassium and rubidium atoms, the team used magnetic fields and precision lasers to create ultracold molecules with a unique quality: They are dipolar, which means they carry a positive charge at one end and a negative charge at the other.

Having two different electric charges means that molecules can interact with each other more or less strongly, depending on the direction they are facing--something like the way two magnets attract or repel each other, depending on the position of their poles.

"Many people have theorized that it would be interesting to make quantum gases of ultracold polar molecules, and a lot of people have tried to make them," Jin said.

One of the first practical applications suggested for these gases is in quantum computing, which is based on the theory of quantum mechanics. While still in its infancy, scientists predict that quantum computing will be able to quickly solve problems that would be too complex for today's digital computers.

Unlike Newtonian mechanics, which describes the motions of stars and planets in space, quantum mechanics predicts the movements of electrons and the other invisible particles that make up all matter. And unlike digital computing, which relies on only two possible information states-on or off-quantum computing depends on the idea that in the quantum world, both states could exist at the same time, superimposed on top of each other. The scientific term for this is "entangled."

But before quantum computing can be realized, scientists need to understand quantum mechanics more fully. To do this, they look for laboratory models that can be used to probe and manipulate particles in a quantum state. One such model is an ultracold highly condensed atom gas called a Bose-Einstein Condensate (BEC).

For the past few years, physicists have known how to create BECs by cooling and compressing atom gases using magnetic fields. When the atoms become cold and dense enough, they begin to behave according to quantum rules, rather than Newtonian rules.

But scientists have theorized that ultracold polar molecule gases would be even more valuable than atom gases for many reasons. "To model a wider range of behaviors, you'd like not just atoms, but molecules, which can have more interesting interactions," Jin said.

"In ultracold atom gases, the atoms only interact when they are right on top of each other-like two pool balls bouncing off of each other in a collision," Jin said. "But ultracold polar molecules can feel each other even when they're some distance apart, because they're interacting with their electric dipole moments."

According to Jin, electric dipoles are similar to magnetic dipoles. "When two magnets get close to each other, they can affect each other without touching," she said. "In the same way, polar molecules can ‘feel' each other, without actually colliding."

Not only can they interact from a distance, ultracold polar molecules can also be controlled by electric fields. "For quantum computing, you want to make molecules in entangled states talk to each other when you want them to, but not when you don't want them to," said Jin. "With polar molecules, you can turn on this strong dipole-dipole interaction by applying an electric field; then you can turn it back off by applying zero field."

In addition to quantum computing, researchers are interested in using ultracold polar molecules as models for studying complicated physical systems, such as superconductors. Scientists think that someday, superconductors could make it possible to generate and transport electrical power with 99 percent efficiency, which should benefit both the environment and the economy.

"A superconductor is a material that carries electricity without loss," Jin said. "But the material itself is hard to control and there's a lot of complicated stuff going on."

These complexities make it valuable to use atom, and now molecule gases, to model superconductivity in the laboratory. "When you're modeling anything that depends on an electron's quantum behavior, like superconductors, it's essential that the model is quantum mechanical," Jin said.

A third application suggested for ultracold polar molecules is in precision measurements, such as keeping highly accurate time or even measuring the fundamental physical constants of the universe. "For doing precision measurement, you want the particles to be ultracold so you can hold on to them for a long time," said Jin. "At ultracold temperatures, particles move so slowly that you can trap them more easily, and they don't have shifts caused by their motion."

Again, molecules are more useful for precision measurements than atoms because molecular transitions are more complex than atomic transitions. Transitions happen when electrons jump from one energy state to another.

"People talk about using ultracold polar molecules to test the standard physics model for understanding how all things work," said Jin. "Because they are so precise, you can test whether certain fundamental constants are really constant. Ultracold polar molecule gases will give you a new sort of laboratory where you can do these precision measurements."

Researchers have been working for about 10 years to create ultracold polar molecules. "There are a number of reasons why it's difficult, and there have been a lot of different approaches." Jin said. "Some people have been trying to directly cool molecules down to these low temperatures. And some, like us, have started with cold atoms and tried to assemble cold molecules from there."

Although progress was made, results were limited. "There's been a lot of creativity, a lot of innovation, and a lot of results have happened," said Jin. "But nobody had been able to realize everything that you'd want."

Another problem has been trying to creating molecules that have strong bonds between the atoms. "Some researchers have made ultracold molecules that are very weakly bound," Jin said. "At these temperatures they are stable, but they are not going to be polar."

Using magnetic fields to contain and cool a gas to ultracold temperatures, Jin and her group were the first in the world to create an exotic new type of molecule, called Fermi pairs, about five years ago. "These molecules don't normally exist and are only stable at extremely low temperatures," she said.

Using these weakly bound molecules as a starting point, Ye's and Jin's group fired very precisely controlled laser pulses, called a STIRAP (Stimulated Raman Adiabatic Passage), into the gas. This technique uses two very different wavelengths of light locked perfectly together to stimulate the gas molecules. Contrary to what you would expect, the laser light adds no heat to the gas.

Instead, the laser's energy compresses the molecules, transferring them from their weakly bound ("fluffy") state to a tightly bound ground-or resting-state. "When the two different kinds of atoms come close together and pair into a molecule, they release a binding energy," Jin explained.

Normally, the released energy would add heat, raising the gas temperature too high to remain in an ultracold quantum state. In order to keep the molecules ultracold, then, the researchers had to find a way to prevent any of that released energy from leaking into the gas.

"Remember we're starting at ridiculously low temperatures, so the challenge is to take away all that energy with the photons," Jin said. "What happens is that these weakly bound molecules absorb a photon from the lasers and then emit another, more energetic photon. The trick is that the two photons aren't the same color, or wavelength."

The process has to be very precisely controlled, so that every molecule emits exactly the same color photon. This "coherent transfer" keeps all the molecules in the same low-energy state.

Another requirement for ultracold molecular gases was creating molecules with the same rotational and vibrational state.

"You may have ultracold polar molecules, but they're in many different rovibrational states, so that in some sense they're still hot," Jin said. "The molecules can be hot, because they have translational motion, or because they are distributed among a lot of vibrational and rotational levels. But our molecules are stable and trapped, so they are cold in all these degrees of freedom."

The paper, which was published in Science on Oct. 10, reports that Jin and Ye's groups created a quantum molecular potassium-rubidium gas with the following features:

"The measure of what's needed to realize the different proposals for using ultracold polar molecules is quite tough," said Jin. "We were able to take ultracold atoms and put them together into molecules, basically doing chemistry without release of energy.

"With this approach, we have a remarkable ability to control the system," she said. "Now we are poised to start realizing some of these proposals, or at least making the first steps to seeing the effects of these interactions inside the gas."