Down Boy: Investigating the Domestication of Dogs Through DNA 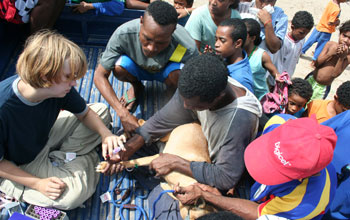 Taking a dog's blood in the back of a pick-up truck mobbed by interested Papuans.

Most animal lovers can't resist bringing home the occasional stray dog. Imagine, then, having to fight this impulse every day, and on the other side of the world, all while trying to maintain some measure of scientific detachment.

Ryan Boyko and his fellow researchers, who spent two years collecting blood samples from more than 1,200 stray dogs in dozens of countries and five continents, understand these emotions very well.

"We wanted to bring dogs home to everyone we know, but having to travel across several more countries and continents made it a little easier to say no," Boyko says. "Also, our own dog at home, a mutt rescued from an ASPCA shelter, most likely is glad we didn't bring home a rambunctious village dog. I'm not necessarily convinced many of them would enjoy living in a normal American house or apartment. One day, though, we plan to get a big ranch."

Ryan Boyko and his wife, Cori, are the traveling members of a team of collaborators led by his brother, Adam Boyko, an evolutionary genomicist from Stanford University. They, along with researchers from UCLA and the National Human Genome Research Institute, are involved in a large research project studying dog genetics and evolution. "Dogs really are a powerful model system for understanding how evolutionary forces influence genetic variation among populations," says Carlos Bustamante, a professor of genetics at the Stanford University School of Medicine.

The Stanford group is mapping the genetic origins of "village" dogs, those mutts and strays that are a "natural or randomly breeding population of dogs that pretty much live how dogs have lived throughout the ages," says Adam Boyko. While geneticists have learned a great deal in recent years about the evolution of breed dogs, the researchers still don't know very much about the dogs' street-wise cousins. Scientists believe that studying village dogs can provide important new information about dog domestication and evolutionary genomics.

"If we think about dogs, they live in different types of worlds," Bustamante says. "Breed dogs, we keep in our homes. Wolves live in the wild and are subject to natural selection. Then you have village dogs, which are somewhere in between. They have undergone some degree of adaptive change, living near humans--but still are subject to natural selection, the way wolves are. So by studying them, we can get a much better picture of the evolutionary process."

The village dog project evolved from the three-way collaboration among Bustamante, UCLA professor of ecology and evolutionary biology Robert Wayne, and Elaine Ostrander, chief and senior investigator, cancer and genetics branch of the National Human Genome Research Institute. Ostrander studies genes important in growth regulation, particularly as they apply to human and dog diseases, while Wayne's team at UCLA has focused on breed dogs.

Last year, the UCLA researchers released a National Science Foundation- (NSF) funded study showing that most breed dogs can trace their origins to Middle Eastern wolves, instead of Asian or European wolves as previously thought. The UCLA work also produced the first evolutionary tree of dog breeds, showing a surprising structure that suggested that new breeds were developed from crosses within specific breed groups that share particular traits.

These studies focused on breed dogs, which is very important in identifying genetic differences among breeds. "But there was a piece missing--village dogs," Bustamante says. "These are dogs that are not pure-bred dogs, who can hearken back to pre-breed diversity."

Bustamante, who recently received a prestigious $500,000 MacArthur "genius" award, is leading the project--believed to be the largest of its kind--to genotype stray dogs around the world. He and his team, which began the effort while at Cornell University, enlisted the help of numerous local researchers, shelters and veterinarians abroad to help find and sample the dogs. The researchers made numerous trips between June 2007 and September 2009 to collect their samples.

"The procedure involved talking to locals to find dogs that were living in the community, or working with shelters to sample shelter dogs that had been brought there from around the area," says Adam Boyko, a research assistant in the department of genetics. "Dogs were briefly muzzled for safety, and then weighed, measured and photographed before 3-5 milliliters of blood was drawn for an analysis."

But Ryan Boyko and his wife Cori, the ones who actually had to find the dogs and take the samples, say their experiences were never quite that simple. To put villagers at ease about the dog testing and to gain the villagers' cooperation, the researchers sometimes found themselves acquiescing to a variety of local customs and practices.

Along the way, the team hired a diverse assortment of local assistants, "from a female village leader in Uganda who insisted that we not carry our own supplies--to be fair, she clearly could've taken Ryan in a fight any day--to the seven-year-old Namibian boy who brought us to every house in his village that kept a dog, to a 16-year-old volunteer from an animal shelter who translated for us in Egypt," Cori Boyko says.

In Lebanon, Ryan Boyko had to bathe a zoo bear, a suggestion from their local collaborator, a specialist in big mammals at the American University of Beirut. "The bear actually had a bathtub in his enclosure, and would enter it to be hosed off," he says. "Once done, he shook off, soaking me."

"It was also a good thing this collaborator was used to dealing with large mammals since the shepherds' dogs near the border with Syria were very large and not used to handling," he adds. "There were also enormous guard dogs in that area. After the DNA was analyzed, we found out one of these dogs was actually a full-blooded wolf."

The research is being funded by NSF as part of the American Recovery and Reinvestment Act of 2009. The money "has allowed us to turn dogs into a model species in evolutionary genomics, as well as answer important questions about how domestication and adaptation to human environments have shaped the dog genome prior to the advent of modern artificial selection toward breed standards," Adam Boyko says.

Ultimately, the scientists believe the information will provide important insights not only into dog genetics, but human genetics as well. "Understanding the dog genome helps us understand the human genome," Bustamante says. "It helps us understand human traits. Dogs are the most phenotypically diverse species--if humans varied as much as dogs, we'd have two-feet-tall humans and 20-feet-tall humans."

Adam Boyko agrees. "Dogs are fast becoming an important species for medical genomics," he says. "Many disease variants have been found in dogs, some of which have given us important insights into human disease."

The researchers are examining common genetic markers among the street dogs, and comparing them to wolves and breed dogs. They also are sequencing the genome and "will build demographic models to compare the genomes of the village dogs to the wolves and the domestic dogs to see what's unique and shared, and what you see only in breed dogs," Bustamante says.

The implications of having this repository of out-bred dog DNA samples and phenotypic data are huge. "We now have better resolution than ever for determining the origin of dogs as well as the first ever picture of what 'natural' dog populations look like phenotypically and genetically," Adam Boyko says.

Although the Boykos did not come home with any newly adopted dogs, they returned with a new appreciation for everything the locals were doing to help the animals.

"We've been to animal shelters in Egypt, Papua New Guinea, Qatar, Lebanon, Puerto Rico, Indonesia, India and across Turkey, all with varying levels of resources, space per animal and such," Ryan Boyko says. "Still, it was amazing to see that across the world, even where people in general do not like or appreciate dogs, some people still are trying valiantly to make dogs' lives better, and their treatment more humane. We saw superhuman efforts in all these places."