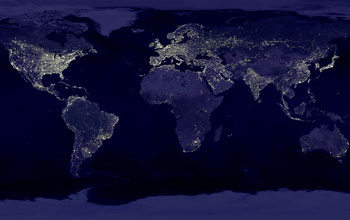 The glow of lights in a city at night means different things to different people. For some, the amazing hues along Broadway, the Las Vegas Strip or the Sunset Strip in Hollywood mean a fun night out. For an economist, these dazzling lights signify people's pockets are flush with cash; and in fact, a new study confirms it.

Called luminosity data, researchers measure the glow or radiance of this artificial, or "human induced," lighting to study economic growth, poverty, health status and environmental conditions. They use it to track GDP and other economic activity.

Although the approach is highly promising, Nordhaus and Chen say its application may be best suited for countries with limited data collection programs where it is most needed.

"We were surprised that it was less useful for Africa than we thought because of noise in the data," said Nordhaus. "Africa turns out to be very ‘dark' in the lights data."

Nordhaus and Chen conducted the study to determine whether luminosity could be used to improve estimates of economic outputs in countries at the regional and sub-national levels.

The authors organized countries into five "grades"--A through E--as a way of rating the quality of their statistical data. Countries such as the United States rated an A, while Afghanistan and Sudan earned a grade of E.

They then overlaid a grid composed of squares of a predetermined size on high-resolution, nighttime images from the National Science Foundation- (NSF) supported Geographically based Economic data project at Yale. The nighttime images were taken by U.S. satellites, part of the Defense Meteorological Satellite Program Operational Linescan System, which provides economic data on a 1 degree latitude by 1 degree longitude basis.

Afterwards, they measured the amount of light, or radiance, in each cell. The brighter the light, the more economic activity there was in the region.

Based on their analysis, Nordhaus and Chen found luminosity is likely to add value as a substitute for standard measures of economic output in countries with statistical systems graded D and E--those that are war-torn, have no reliable censuses of population and have only rudimentary economic statistics.

By contrast, luminosity has very limited value for countries with high quality statistical systems, grades A and B.

"The reason for the low value added of luminosity in high-grade countries is that the luminosity data have high measurement error," the researchers write in their report published in the Proceedings of the National Academy of Sciences. By comparison they say measurement errors in economic data produced by standard surveys in high-grade countries are relatively small.

Errors show up in data for all countries regardless of grade. But, "The standard economic accounts are so poor for D and E, that lights may have value added here," said Nordhaus.

"What is really interesting is that the lights data are available at a very high resolution, close to 1 x 1 kilometers, and therefore have great promise for use as a proxy," he said.

The researchers say the approach can be made better if the quality of the satellite lights data can be improved. They say this is the major constraint for developing data using luminosity.

"We found it a very important possibility for synthesizing socioeconomic and geophysical data," Nordhaus said.

The paper, "Using luminosity data as a proxy for economic statistics" was published in PNAS' May 24 edition. The study was funded in part by NSF's Division of Social and Economic Sciences. The U.S. Department of Energy and the Glaser Foundation also contributed funding to the study.