Marla Spivak: A Scientist With a Real Bee in Her Bonnet 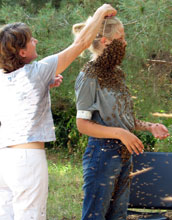 Trying on a bee beard.

How do we study bees and why are they disappearing?  How are scientists working to save bees? Marla Spivak--a MacArthur Fellow and Distinguished McKnight Professor, and extension entomologist in the Department of Entomology at the University of Minnesota--answers these questions and more.

In the interview that follows, Spivak explains the importance of bees and how her research is helping scientists learn more about these pollinators. Also, readers can get to know more about Spivak in this ScienceLives and learn step-by-step instructions on how to wear a "bee beard" in this Research in Action.

Why are honey bees important for agriculture, the economy and the health of ecosystems?

More than one-third of the world's fruits, vegetables and flowering plants are dependent on pollination by bees. All told, the pollination services provided by honey bees in North America are currently valued at about $20 billion annually--not even counting the value of honey and beeswax that is produced by honey bees.

Bees live on every continent, except Antarctica, and in all habitats that harbor insect-pollinated flowering plants. The pollination services provided by bees promote the health of the habitats in which they live.

When did you become fascinated by bees?

My fascination with bees began one night in college when I happened to pick up a book on bees that was so absorbing that I ended up pulling an all-nighter just to finish it. Later in college, I worked for several commercial beekeepers to learn more about bees.

Then, after college, I worked on a study in Venezuela on Africanized honey bees (AHB), commonly known as "killer bees." Interestingly, there is a great deal of behavioral variation among AHB colonies, and AHBs seem to be more resistant to parasites than honey bees in the U.S., which originated in Europe. I am fascinated by the potential opportunities to breed AHBs and select for their good behavioral qualities and disease resistance.

How and why are bees currently disappearing?

During the winter of 2006, honey bee hives across the U.S. were suddenly and inexplicably abandoned by their worker bees, which simply flew off to die. The result: keepers of honey bees reported losses of 30 to 90 percent.

Subsequent investigations suggested that this phenomenon, which is now known as Colony Collapse Disorder (CCD), may have already been occurring for at least three years before the first CCD cases were reported in 2006. Adding insult to injury, the onset of CCD, which continues today, followed more than 50 years of less dramatic, but still significant, day-to-day losses to beekeeping operations from the combined effects of parasites, diseases, poor nutrition, pesticide poisonings and habitat losses.

But honey bees are not the only bees that are currently experiencing losses. Populations of some types of bees that are native to the U.S., including bumble bees and leafcutter bees, are also currently declining.

Many scientists suspect that CCD is the result of stress that is imposed on bees by one or a combination of factors. Such stress may compromise the immune systems of bees, and thereby increase the vulnerability of their colonies to diseases. Immune-suppressing stresses may include poor nutrition due to shortages of flowers that provide nectar and pollen to bees, poisoning from pesticides, parasitic mites and new and emerging diseases that infect bees.

Another potential contributing factor to CCD may be the widespread use of monoculture, an agricultural practice that involves devoting large areas of farmland to a single species, such as a type of fruit, vegetable or nut (usually almonds) that must be pollinated by bees.

Here's the problem: in many cases, in order to yield sufficient crop production, land that is farmed by monoculture needs more bee pollination than can be provided by resident bee populations. To compensate for this pollination shortage, massive numbers of honey bee colonies are continually transported across the U.S. to monocultured farms. But unfortunately, such transport may increase the vulnerability of bees to disease.

How are you and your research team working to help save honey bees?

My research team and I study bee health. I like to say that our ultimate, long-term practical goal is to "get bees back on their own six feet" by promoting their natural defenses.

In other words, we are developing methods to improve the survival rates of bees, control diseases in bee hives, and ensure healthy, strong colonies for honey production and pollination, so that beekeepers can reduce their reliance on chemical treatments to keep colonies alive. A reduction of antibiotic and pesticide use reduces operating costs for beekeepers, improves the environment, and promotes the purity of honey, wax and other marketable bee products.

In addition to producing important practical applications for beekeepers, our bee studies have advanced our fundamental understanding of bee biology.

What are some of your approaches to improving bee survival?

With funding from the National Science Foundation (NSF), my research team and I have studied the ability of honey bees to detect and remove immature bees (larvae and pupae) from the nest that are diseased but not yet infectious. This ability--known as hygienic behavior--decreases disease transmission and increases the entire colony's resistance to certain types of virulent disease-causing organisms.

Also with NSF funding, my team and I are currently researching resins known as propolis. Propolis is collected from plants by honey bees, and then used by bees to seal cracks in their nests. Propolis has long been known for its diverse microbial properties and as a human medicine. However, my team and I are among the first researchers to study the anti-microbial benefits of propolis for bees.

So far, our studies have shown that propolis does influence bee immunity. Now we are investigating whether these immunological changes promote colony health. Also, we are working to identify which chemical components of propolis fight disease-causing microbes in bees. We hope that our research will eventually lead to the identification of chemical components in propolis that would fight disease-causing microbes in humans.

You are a 2010 MacArthur Foundation Fellow. Will your MacArthur Fellowship enable you to conduct any particular types of research that you would have otherwise been unable to conduct?

The MacArthur Fellowship will enable me to try some riskier and more creative experiments that might not be funded by federal or other granting agencies. It will also allow me to launch some innovative extension programs to help bees and beekeepers.

You have achieved so much and are making such important contributions to science. Are there any secrets to your success that might be particularly helpful for aspiring scientists to know?

I was lucky enough to find a passion early in life, which still drives me to learn more. I am very drawn to bees and beekeeping, and want to make sure my research is helpful to both. Personal success was never really on my radar, but in retrospect, extreme persistence and following my intuition have been key ingredients in all my endeavors.