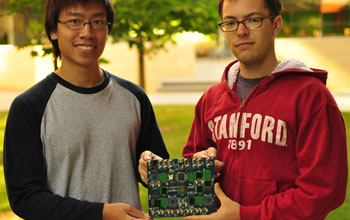 Neurogrid can simulate the activity of 1 million neurons in real time.

In November 2012, IBM announced that it had used the Blue Gene/Q Sequoia supercomputer to achieve an unprecedented simulation of more than 530 billion neurons. The Blue Gene/Q Sequoia accomplished this feat thanks to its blazing fast speed; it clocks in at over 16 quadrillion calculations per second. In fact, it currently ranks as the second fastest supercomputer in the world.

But, according to Kwabena Boahen, Ph.D., the Blue Gene still doesn't compare to the computational power of the brain itself.

"The brain is actually able to do more calculations per second than even the fastest supercomputer," says Boahen, a professor at Stanford University, director of the Brains in Silicon research laboratory and an NSF Faculty Early Career Development grant recipient.

That's not to say the brain is faster than a supercomputer. In fact, it's actually much slower. The brain can do more calculations per second because it's "massively parallel," meaning networks of neurons are working simultaneously to solve a great number of problems at once. Traditional computing platforms, no matter how fast, operate sequentially, meaning each step must be complete before the next step is begun.

Boahen works at the forefront of a field called neuromorphic engineering, which seeks to replicate the brain's extraordinary computational abilities using innovative hardware and software applications. His laboratory's most recent accomplishment is a new computing platform called Neurogrid, which simulates the activity of 1 million neurons.

Neurogrid is not a supercomputer. It can't be used to simulate the big bang or forecast hurricanes or predict epidemics. But what it can do sets it apart from any computational platform on Earth.

Neurogrid is the first simulation platform that can model a million neurons in real time. As such, it represents a powerful tool for investigating the human brain. In addition to providing insight into the normal workings of the brain, it has the potential to shed light on complex brain diseases like autism and schizophrenia, which have so far been difficult to model.

The proven ability to simulate brain function in real time has, so far, been underwhelming. For example, the Blue Gene/Q Sequoia supercomputer's simulation took over 1,500 times longer than it would take the brain to do the same activity.

Cheaper brain simulation platforms that combine the computing power of traditional central processing units (CPUs) with graphical processing units (GPUs) and field programmable gate arrays (FPGAs) to achieve results comparable to the Blue Gene are emerging on the market. However, while these systems are more affordable, they are still frustratingly slower than the brain.

When you consider that the simulations sometimes need to be checked, tweaked, rechecked and run again hundreds of times, the value of a system that can replicate brain activity in real time becomes obvious.

Each of Neurogrid's 16 chips contains more than 65,000 silicon "neurons" whose activity can be programmed according to nearly 80 parameters, allowing researchers to replicate the unique characteristics of different types of neurons. Soft-wired "synapses" crisscross the board, shuttling signals between every simulated neuron and the thousands of neurons it is networked with, effectively replicating the electrical chatter that constitutes communication in the brain.

But the fundamental difference between the way traditional computing systems model the brain and the way Neurogrid works lies in the way the computations are performed and communicated throughout the system.

Most computers, including supercomputers, rely on digital signaling, meaning the computer carries out instructions by essentially answering "true" or "false" to a series of questions. This is similar to how neurons communicate: they either fire an action potential, or they don't.

In addition to its superior simulations, it also uses a fraction of the energy of a supercomputer. For example, the Blue Gene/Q Sequoia consumes nearly 8 megawatts of electricity, enough to power over 1,600 homes. Eight megawatts at $0.10/kWh is $800 an hour, or a little over $7 million a year.

Neurogrid, on the other hand, operates on a paltry 5 watts, the amount of power used by a single cellphone charger.

Ultimately, Neurogrid represents a cost-effective, energy-efficient computing platform that Boahen hopes will revolutionize our understanding of the brain.