Aurorasaurus project allows aurora-viewers around the world to compare sightings 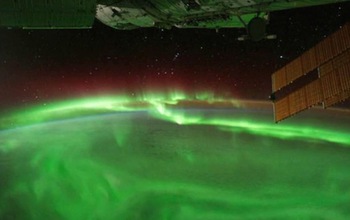 Dance of the spirits, it's known by the Cree, one of North America's largest groups of Native Americans.

The sun continuously produces a solar wind of charged particles, or plasma. As that "breath" reaches Earth, it causes our planet's magnetic field to shapeshift from round to teardrop--with a long tail on the side farthest from the sun.

The teardrop-stretched field ultimately reconfigures into two parts, one controlled by Earth's magnetic field, the other by the solar wind.

The instability excites the solar-charged particles. They follow spiral paths along lines connecting Earth's north and south magnetic poles to its atmosphere.

"What happens next," says scientist Elizabeth MacDonald of the New Mexico Consortium in Los Alamos, "is one of nature's most spectacular sights: the aurora."

The light of the aurora is emitted when the charged particles collide with gases in Earth's upper atmosphere.

How often the aurora is visible in an area, MacDonald says, depends upon a host of factors, including the intensity of the solar wind; the season--the aurora may be strongest around the spring and fall equinoxes; whether the sun is near the peak of its 11-year cycle; and how far someone is from what scientists call the auroral oval, the lights' ring-shaped display.

Knowing where and when an aurora is happening has been difficult to find out--until now. A new project called Aurorasaurus allows citizens around the world to track auroras and report on their progress. Aurorasaurus is designed by researchers from the New Mexico Consortium, Pennsylvania State University and Science Education Solutions.

Visitors to the Aurorasaurus website can see where an aurora is happening in real-time, let other Aurorasaurus visitors know of an aurora's existence, and receive "early warnings" when an aurora is likely to happen in their Earth-neighborhood.

"Auroras are beautiful displays that have fascinated humans through the ages," says Therese Moretto Jorgensen, program director in the National Science Foundation's (NSF) Directorate for Geosciences, which, along with NSF's Directorate for Education and Human Resources and Directorate for Computer & Information Science & Engineering, funds Aurorasaurus through NSF's INSPIRE program.

INSPIRE supports projects whose scientific advances lie outside the scope of a single program or discipline, lines of research that promise transformational advances, and prospective discoveries at the interfaces of scientific boundaries.

"Auroras are of major interest," says Moretto Jorgensen, "because of their effects on Earth. There's a close relationship between auroras and the magnetic variations that pose a threat to the power grid.

"A better understanding of when and where auroras happen will help us develop models that can forecast these potentially hazardous events."

Scientists hope that by amassing data from thousands of aurora-viewers, they'll learn more about the solar storms that can disrupt or destroy Earth's communications networks and affect the planet's navigation, pipeline, electrical and transportation systems.

During one solar storm in 1989, transformers in New Jersey melted and wiped out power all the way to Quebec, leaving millions of people in the dark.

The largest such solar storm in history, the Carrington Event, zapped Earth in 1859. It was so large it lit up the skies with auroras from the poles to the tropics. Electrical currents from the storm caused fires in telegraph systems and knocked out communications.

Could it happen again? Yes, if St. Patrick's Day this year is any guide.

On March 17, 2015, researchers and the public were treated to once-a-decade views. As people waited for glimpses of leprechauns, they saw something even more magical, viewers say.

Earth experienced the biggest solar storm to date of this 11-year sun cycle, sparking auroras around the world.

The St. Patrick's Day auroras, many of which were indeed green, were a fortuitous combination of events. Two days earlier, there was an explosion on the sun. The explosion, called a coronal mass ejection (CME), unleashed a blast of gas bubbles that created a strong disturbance as it collided with Earth's magnetic field.

"The storm's conditions led to a perfect environment for aurora-hunting," she says. On a scale of G1 (minor) to G5 (extreme), the storm reached a G4, or "severe" level.

The storm's Kp index, a global solar storm index, registered in the 6-8 range (9 is the highest).

Rare aurora-viewing--all the way to the southern U.S.

The solar storm's peak hit during the daytime over most of the United States and Europe, but the storm persisted into the night and offered Americans and Europeans a brilliant nighttime light show.

Aurorasaurus reports came in from unusual regions: the south of England, Germany and Poland. In the United States, people spotted auroras in states such as Pennsylvania, Virginia and Colorado.

From midnight on March 17th through mid-day on March 18th, the number of registered users increased by 50 percent. Registering allows Aurorasaurus to communicate information in return, sending location-based sighting alerts.

"We combine reports to provide real-time alerts when auroras might be visible nearby," says MacDonald. "During this storm alone, we issued 361 such notifications.

Adds Moretto Jorgensen, "Auroras on a global scale are very difficult to capture using traditional scientific methods. Human observers linked through Aurorasaurus are a unique network for documenting them."

Whether on St. Patrick's Day or any other Earth-day, the aurora carries a message: take time to look up at one of the planet's most breathtaking sights.

Then look down, to be sure you can send photos of the event from your cell phone. Spirits dancing across the skies may have played havoc with its transmissions.