Exploring the human side of climate change adaptation 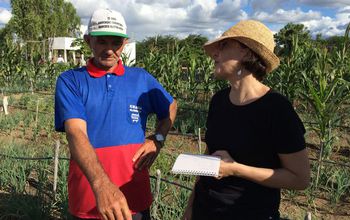 In public policy, communities often measure their ability to respond to the effects of climate change and natural disasters in terms of traditional emergency resources--the number of sandbags available, or access to ambulances and hospitals. But Maria Carmen Lemos' research indicates that they need also to look at the human side: behavioral, social and economic factors including income, education, health and understanding of technology to build "adaptive capacity" to respond to these events.

Lemos, a professor of natural resources and environment at the University of Michigan, Ann Arbor, studies the impact of climate change, and efforts by governments to address growing concerns about their vulnerabilities to weather-related disasters. During a recent lecture at National Science Foundation (NSF) headquarters, Lemos discussed the possibility of developing a conceptual model that can help governments make effective decisions about adaptation that could work anywhere from rural South America to cities in the U.S. Great Lakes region.

"This involves thinking about basic relationships between different kinds of capacities, to understand how those things build off each other, or trade off on each other," she said in an interview.

Her key metric, adaptive capacity, involves the resources available to a community to adapt to climate threats. The measure of a community's adaptive capacity can change, though, depending on the level and type of threat it's facing. Something like a drought can have devastating effects, but is slow-moving and easy to spot, as disasters go. A flood, on the other hand, hits quickly.

Adaptive capacity is shaped not just by the nature of the specific climate event, but also by generic stressors that affect people such as economic crisis, social instability, unemployment, lack of education, safety, and poor access to healthcare and social services. That's why Lemos looks at how people are sensitive to those generic stressors, starting by asking them about the vulnerabilities that already cause them the most distress. The research, in short, looks at the human side of coping with climate change.

Although some of Lemos' research has taken her to areas of the world where climate change effects have already created hardships on communities, her central concept of measuring capacity at the societal level resonates everywhere. Communities across the United States and around the world are starting to think about adaptive capacity in relation to climate change, even if they're not using those words to talk about it.

"We found in a lot of assessments that people don't call it ‘adaptation,'" Lemos said. "They call it sustainability for the most part, because it's more palatable. And from sustainability they move to resilience."

She cautioned, however, that measuring adaptive capacity, and building strategies to adapt to climate change or natural disasters should not be confused with making a community invulnerable to weather events. In fact, that assumption could actually be harmful if communities become overconfident and then find themselves facing a threat greater than anything they expected. Prosperous nations like the United States, she said, could actually slip into that overconfidence more easily than nations that have to confront their lack of capacity more frequently.

Getting to the point of building a model for strategic thinking about adaptive capacity requires an enormous amount of study and data analysis, because adaptive capacity involves so many variables--and those factors can vary wildly among different locations and communities.

"In this field, we don't talk about one-size fits all," Lemos said.

In Brazil, where Lemos has conducted some of her NSF-supported research, droughts are frequent, and can be catastrophic. In response, the government has tried to build drought-specific capacities, including maintaining irrigation systems and developing a program to distribute higher-quality hybrid seed.

But deficiencies in some general, societal capacities can derail effective implementation of those specific measures, she said.

In the hybrid seed program's early years the government only had a limited number of distribution centers, sometimes requiring farmers to travel long distances to access them. Many poor farmers, however, could not afford to take time out of their fields to get the seed, or afford the bus fare they would need to travel. If farmers were illiterate, they could not read crucial instructions saying how to successfully raise the hybrid crops.

A key part of Lemos' work is coming up with a conceptual model that will work in many parts of the world, where different countries face much different challenges with respect to their specific and generic capabilities. To that end, she's connected her research in Brazil to studies her lab is conducting in six cities in the Great Lakes region, with support from the National Oceanographic and Atmospheric Association. That research has uncovered a completely different set of behavioral and social issues at play.

"Education and literacy might not be such a big deal here in the U.S., but communication of risk? Now that becomes a problem," Lemos said.

Those Great Lakes communities already have some specific weather-mitigation resources in place, but they're largely geared toward harsh winters. They're less prepared for events such as increased flooding or the emergence of "heat islands," urban areas that are significantly warmer than their surroundings because of their concentrations of roofs, pavements and other surfaces that absorb sunlight.

The potential for multiple, different threats highlights something important about adaptive capacity--it's not a measure of resources to address one particular threat. Instead, it deals with a community's level of resilience in the face of a variety of challenges. Given the high degree of uncertainty about possible future climate change effects, Lemos contends, it makes more sense to focus on total capacity than on adaptations to specific threats.

Thus far, Lemos' research has shown that cities with flexibility to shift their resources to quickly build up capacities are ahead of the pack. Ann Arbor can take advantage of the resources made available by the University of Michigan's campus. Those include skilled labor and innovation--for instance, the school, along with Michigan State University, is home to the Great Lakes Integrated Sciences and Assessment team, a group Lemos helped found that seeks to overcome traditional institutional barriers and provide useful climate change data to stakeholders in the community that can make use of them.

Lemos also cited Grand Rapids as a flexible community. The city is home to a community foundation that can fund innovation-fostering projects in more flexible ways than other communities could.

For Lemos, the research is an ongoing process. Her lab is still working to find ways to categorize the different social, behavioral and economic stressors that will influence how people respond to climate change, and to see how they relate to climate models that measure the manifestations of climate change. The goal is to come up with a theoretical model that can help policymakers in places as diverse as Brazil and the United States make decisions about how to invest in capacity. That research could help communities respond and recover from even those climate change effects they don't see coming.