Updates to the geologic record connect to the region’s resources 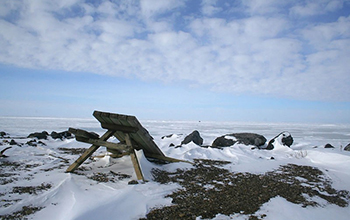 Scientists are finding new clues to the geologic history of the Arctic region.

Parts of Alaska's mountainous Brooks Range were likely transported there from Greenland and a stretch of the Canadian Arctic much farther to the east, according to a series of studies detailing more than 300 million years of Arctic geologic history.

The findings update our knowledge of the geologic evolution of the Arctic Ocean, and could help revise predictions about the Arctic’s oil, gas and mineral wealth.

By explaining the formation of the Arctic Ocean in the Western Hemisphere -- known as the Amerasian Basin -- the research, which was funded by NSF's Division of Earth Sciences, provides new clues to the geologic history of the rapidly changing region.

"This is arguably the most important place for the United States from the perspective of Arctic economic development," said geoscientist Justin Strauss of Dartmouth University. "The geology of this region, which is directly connected to its ancient history, will help revise our knowledge about natural resources in the Arctic."

The existing model for the formation of the Arctic Ocean along the U.S. and Canada border details how seismic activity, known as faulting, caused Alaska to rotate away from a western band of islands in the Canadian Arctic beginning some 125 million years ago.

Under this original "rotation" scenario, parts of the Brooks Range should match perfectly with Canada's Banks Island and Victoria Island about 450 hundred miles away.

But the study shows that the area contains rocks with origins as far away as 1,200 miles to the east. The results were published by the Geological Society of America in a Special Papers series.

"The geology of the northeastern Brooks Range does not match anything we've studied in the neighboring region of North America," said Strauss, the lead researcher on the study. "This complicates previous models for how you open this major ocean basin."