Plant physiology will be major contributor to future river flooding 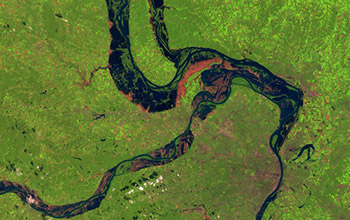 Plant physiology will be as significant as climate change in future river flooding.

The next time a river overflows its banks, don't just blame the rain clouds. Earth system scientists from the University of California, Irvine have identified another culprit: leafy plants.

In a study published in Nature Climate Change, the researchers describe the emerging role of interrelationships of organisms and their environment in understanding flooding. Adapting to an overabundance of carbon dioxide in the atmosphere, trees, plants and grasses constrict their pores to regulate the amount of CO2 they consume, a mechanism that limits the release of water from leaves through evaporation.

"Plants get more water-efficient and leak less underground soil moisture through their pores in a carbon-rich atmosphere," said study co-author Mike Pritchard of UCI. "Add this up over billions of leaves in very sunlit, leafy places, especially the tropics, and it means there is a bunch more soil moisture stored up underground, so much so that climate models predict rainfall events will saturate the ground and more rain will run into rivers."

Pritchard said this so-called forest effect dominates atmospheric responses to CO2 on most land masses up to 30 degrees north and south of the equator, which is where most people live. And he noted that this plant-based phenomenon could have a large influence on flooding in the Mississippi River basin.

"I was really interested in the Mississippi because it's in our own national backyard," Pritchard said. "It's a big, complex basin fed by multiple sources."

He said the twin effects of plant physiology in the U.S. Southeast and precipitation anomalies caused by atmospheric warming farther north in the Mississippi basin "are conspiring to juice up the future flood statistics in equal proportion."

The research is funded by NSF's Division of Atmospheric and Geospace Sciences.