Scientists identify 13,634 plant species in New Guinea, with thousands yet to be discovered 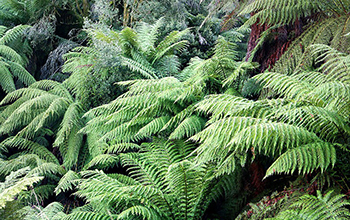 Scientists studied ferns and other plants in New Guinea, the world's richest island for plants.

Imagine if there were 600 species of giraffes, some the size of a shrew, some three stories tall, some with purple spots. Suppose there were reports of rare ones wandering high in the mountains of the remote tropical island of New Guinea.

Then also imagine that no one studied any of these species. Now substitute "fern" for "giraffe," and you have a rough sense of the work of University of Vermont botanist Michael Sundue and his colleagues.

In a U.S. National Science Foundation-funded study published in the journal Nature, researchers from 56 institutions present the first expert-verified checklist of the vascular plants of New Guinea and surrounding islands.

The team's work reveals that New Guinea is the world's richest island for plants.

"Biologists are trying to put together the history of life on Earth, and that is done by examining all the constituent organisms that live here," Sundue says, "not just the ones that are easy to find."

So much uncertainty surrounded the number of New Guinea plants known to science that estimates ranged from 9,000 to 25,000. The researchers pored over digital records and plant collections scattered around the world, drawing on the expertise of 99 specialists to tally 13,634 species in 264 families, with thousands yet to be discovered.

Says David Cannatella, a program director in NSF's Division of Environmental Biology, "This contribution is significant not only because it makes use of extensive data from natural history collections that were digitized through NSF support, but it ultimately relies on the knowledge of dozens of botanical taxonomists."