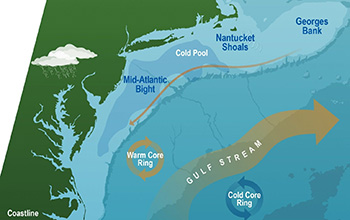 The thin orange arrow marks the flow of the Mid-Atlantic Bight Shelfbreak Jet.

North America experienced a series of dangerous heatwaves during the summer of 2020, breaking records from coast to coast.

In the ocean, extreme warming conditions are also becoming more frequent and intense. A new study by researchers at the Woods Hole Oceanographic Institution investigated marine heatwaves and currents at the edge of the continental shelf to understand the effects on regional ocean circulation and marine life.

In a U.S. National Science Foundation-funded paper published in the Journal of Geophysical Research: Oceans, lead author Jacob Forsyth and colleagues made use of 25 years of oceanographic data collected by the cargo ship Oleander on its weekly voyages between New Jersey and Bermuda.

The measurements provide valuable insights into the Mid-Atlantic Bight Shelfbreak Jet, a cool-water current that flows south along the continental shelf from Labrador to Cape Hatteras.

Forsyth and his co-authors, Glen Gawarkiewicz and Magdalena Andres, noticed a distinct relationship between the current and changing sea temperatures. Not only does the Shelfbreak Jet change seasonally, slowing down considerably from winter to summer, but it had slowed overall by about 10% since data collection began in 1992. The slowdown of the jet is consistent with the long-term warming of continental shelf waters.

"The Shelfbreak Jet is associated with the upwelling of nutrients, which affects the productivity of fisheries," said Gawarkiewicz. "As marine heatwaves become more frequent, we need to understand how that links to the jet."

Starting in 2000, researchers noticed that eddies of warm, salty water breaking off the Gulf Stream, known as warm core rings, had nearly doubled off the New England Continental Shelf.

These rings cause water temperature and salinity to increase and push the Shelfbreak Jet toward shore, sometimes entirely shutting down or reversing the direction of its flow.

The scientists noted that shifting currents and temperatures on the continental shelf have prompted changes in key New England fisheries. Cold-loving lobsters, for example, are slowly moving offshore.

"NSF has funded data collection from the commercial ship Oleander for decades, mostly as a very economical way to observe and understand basin-scale features like the Gulf Stream, only to realize later that it is also a treasure trove of data for what has been happening just off our shores," said Mete Uz, a program director in NSF's Division of Ocean Sciences.