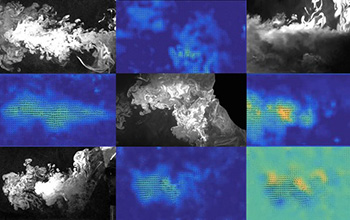 Researchers filmed the movement of a mist of tiny droplets in front of a person.

With implications for the transmission of diseases like the flu, U.S. National Science Foundation-funded researchers have found that ordinary conversation creates a conical 'jetlike' airflow that quickly carries a spray of tiny droplets from a speaker's mouth across an interior space.

"People should recognize that they have an effect around them," said engineer Howard Stone of Princeton University.

Research indicates that people without symptoms could infect others through tiny droplets created when they speak, sing or laugh. Stone and co-lead researcher Manouk Abkarian of the University of Montpellier in France wanted to learn how widely and quickly material exhaled from an average speaker could spread in an interior space.

In a paper published in Proceedings of the National Academy of Sciences, the researchers concluded that for interior activities, normal conversations can spread exhaled material at least as far as, if not beyond, social distancing guidelines. The work examined particle flow in an interior space without good ventilation.

Stone and Abkarian stress that they are not public health experts and are not making medical recommendations. However, they said that public health officials should consider the aerodynamic movement of aerosolized particles generated by speech as an important factor in disease spread.

"It certainly highlights the importance of ventilation," Stone said, "especially if you have an extended conversation."

The researchers also said that while masks do not completely block the flow of aerosols, they play a critical role in disrupting the 'jetlike' air flow from a speaker's mouth, preventing the quick transport of droplets on lengthy scales.

"Masks really cut this flow tremendously," Stone said. "That identifies why most masks play a big role. They cut everything off."

Added Ron Joslin, a program director in NSF's Directorate for Engineering, "This project is one of many such experiments and modeling efforts funded by NSF to better understand, predict and mitigate diseases that are transmitted by respiratory droplets."