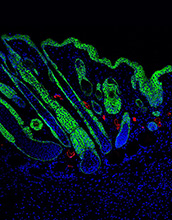 The image shows regenerated hair follicles (in green) at the center of a wound.

Researchers at Duke University and the University of California, Los Angeles have developed a biomaterial that significantly reduces scar formation after wounding, leading to more effective skin healing.

The work builds on the team's previous research with hydrogel scaffolds, which create a structure to support tissue growth and accelerate wound healing. In the new study, the scientists showed that a modified version of this hydrogel activates a regenerative immune response, which can help heal skin injuries such as burns, cuts, diabetic ulcers and other wounds that normally heal with significant scars.

The results appear in the journal Nature Materials.

"The body forms scar tissue as fast as possible to reduce the chance of infection, to reduce pain, and, in larger wounds, to avoid water loss through evaporation," said Maani Archang of UCLA. "It's the natural process of wound healing."

Current wound healing hydrogels available for clinical use sit on the surface of the wound, where they act as a dressing and help prevent the wound from drying out. That in turn helps the wound heal faster, generally by scar formation.

Rather than resting on the skin's surface, microporous particle hydrogels are biomaterials that can integrate into the wound. The beads within the gel link together but leave open spaces, creating a porous structure that provides support for cells as they grow across the wound site. As the wound closes, the gel slowly dissolves, leaving behind healed skin.

"NSF funding played a major part in developing this biomaterial, which quickly degrades once a wound has closed and demonstrates that activating an immune response can trigger regenerative wound healing, leaving behind stronger and healthier skin," said Henry Warchall, a senior advisor in NSF's Division of Mathematical Sciences.