By the late 21st century, the number of people suffering extreme droughts will double 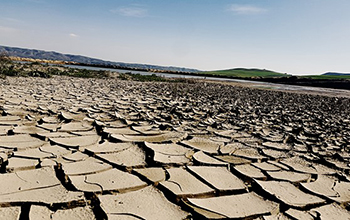 By the late 21st century, the number of people suffering extreme droughts will double.

Researchers at Michigan State University are leading a global effort to offer the first worldwide view of how climate change could affect water availability and drought severity in the decades to come. The research is funded by the U.S. National Science Foundation.

By the late 21st century, the global land area and population facing extreme droughts could more than double -- increasing from 3% during 1976-2005 to 7%-8%, according to Yadu Pokhrel, an MSU civil and environmental engineer and lead author of a paper published in Nature Climate Change.

"More and more people will suffer from extreme droughts if a medium-to-high level of global warming continues and water management is maintained in its present state," Pokhrel said. "Areas of the Southern Hemisphere, where water scarcity is already a problem, will be disproportionately affected. We predict this increase in water scarcity will affect food security and escalate human migration and conflict."

The research team, including more than 20 contributing authors, is projecting a large reduction in natural land water storage in two-thirds of the world, also caused by climate change.

"Our findings are a concern," Pokhrel said. "To date, no study has examined how climate change would impact land water storage globally. Our study presents the first comprehensive picture of how global warming and socioeconomic changes will affect land water storage and what that will mean for droughts through the end of the century."

Added Ingrid Padilla, a program director in NSF's Division of Earth Sciences, "This important study sheds light on future changes in water availability in different regions of the world and provides tools for global readiness and adaptation to water scarcity."