Effects of noise on plants persist over long periods 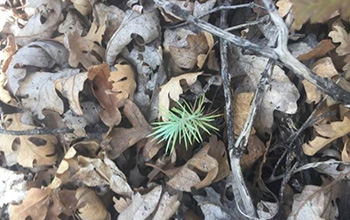 A piñon pine seedling counted during the researchers' vegetation surveys.

Noise has a lasting effect on trees and plants, researchers recently found. A study by scientists at California Polytechnic State University reveals that human noise pollution affects the diversity of plant life in an ecosystem even after the noise has been removed. This is the first study that explores the long-term effects of noise on plant communities. It was published in Proceedings of the Royal Society B.

The U.S. National Science Foundation research was conducted near natural gas wells in New Mexico, where noisy compressors are used to help produce natural gas. The researchers found that there were 75% fewer piñon pine seedlings in noisy sites than in quiet ones. The tree reduction was most likely the result of noise driving away a bird, the Woodhouse's scrub jay, that plants thousands of pine seeds while storing them to eat during the winter months.

After the companies changed the sites of the gas wells and removed the compressors, the areas became quiet. But there were fewer seedlings and saplings compared to sites that hadn't had compressors.

The decrease in saplings was a result of the time the site was noisy; the decrease in seedlings shows that piñon pine seeds were still not sprouting once the noise was removed.

"The effects of noise pollution are affecting the structure of these woodland communities," said biologist and senior author Clint Francis. "What we're seeing is that removal of the noise doesn't necessarily immediately result in a recovery of ecological function."

Added Daniel Marenda, a program director in NSF's Division of Biological Infrastructure, "This work shows that noise made by large-scale human activities can have unknown, long-term ecological implications. It helps us better understand how we can effectively manage our impact on the planet."