New answers to why some mangroves didn't bounce back 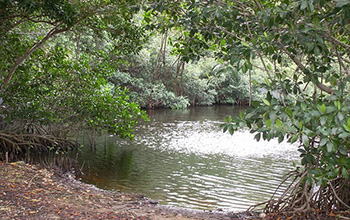 When Hurricane Irma hit southern Florida in September 2017, the storm buffeted coastal mangrove forests with winds of more than 116 mph -- strong enough to rip off leaves, break branches, and snap tree trunks in half. Of the mangrove forests damaged by Irma, some 83% recovered after the first year, but the rest didn't, leaving scientists wondering why some trees never bounced back.

Using data collected before and after Hurricane Irma, researchers found that storm surge and trapped seawater -- not wind -- ultimately caused the trees to die. Trees survived in places where salty ocean water brought in by the hurricane was able to drain, the scientists write in a paper published in Nature Communications.

The findings suggest that improving the flow of water near submerged mangroves or flushing them with freshwater could help restore mangroves after a hurricane.

The U.S. National Science Foundation-funded work found that Hurricane Irma killed more than 10,000 hectares of mangrove forest in southwestern Florida -- about the size of 24,700 football fields. During the storm, many areas were under nearly 10 feet of water. However, most of the dead trees were in areas where salty ocean water came in during Irma and didn’t drain away, submerging mangrove forests for months. The trees in these areas -- often at low elevation or with bowl-shaped topography -- hadn't recovered three years after Irma.

"The wind is doing damage, but the nail in the coffin is storm surge," said David Lagomasino, a coastal geomorphologist at East Carolina University. Excess salt and water from trapped storm surge may choke roots, change microbial communities, break down the soil and kill other vegetation, Lagomasino says, which could lead to tree death.