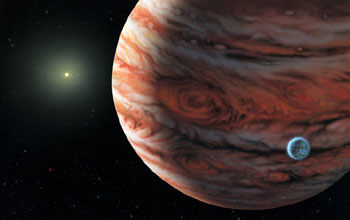 An artist's rendering of a Jupiter-like planet, the larger of the two planets pictured, orbiting a star outside our solar system. Here in our solar system, Jupiter may act as a "junk yard dog," protecting the Earth from comets, maintaining stability and sustaining life as we know it. New research finds stable solar systems such as ours to be the exception, rather than the rule in the universe.

Download the high-resolution JPG version of the image. (14 KB)

Lisa-Joy Zgorski of the National Science Foundation discusses with Ed Thommes of the University of Guelph his research team's surprising findings detailed in "Gas Disks to Gas Giants: Simulating the Birth of Planetary Systems," in the Aug. 8 issue of the journal Science. 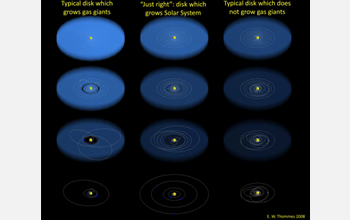 This depiction shows the range of computer simulations used to explore the formation of extra-solar planetary systems. It shows a planet-forming circumstellar disk (the star is in the center) seen at a very highly-inclined angle (close to edge-on) in three different starting condition scenarios (left to right). From top to bottom are snapshots of the system at three intervals between the start of the universe and 500 million years of evolution, at which point the disk makes planets and is cleared out of material.

At left is, "Typical disk which grows gas giants," in which the initial disk mass is high but the viscosity (stickiness) of the disk material is low. This system forms planets early and often, with lots of migration of these planets towards to the central star (where they are destroyed). Big gas giants (similar to Jupiter) are formed in the inner planetary system (where the Earth lives in our solar system). This model closely mimics the types of planetary systems seen today outside our solar system.

At right is, "Typical disk which does not grow gas giants," the case in which the disk mass is low but the viscosity is high. In this case, planet formation is too slow to allow big gas giants to form before the disk is gone.

In the middle is the rare case in between these two extremes in which big gas giants form, but do not migrate to the inner planetary system, and the orbits of all of the planets in the system are circular and stable. This is like our solar system, but it is one of the uncommon results of the simulations.

Download the high-resolution JPG version of the image. (1.4 MB) 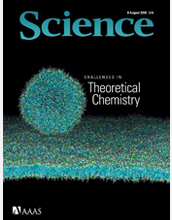 The researchers' findings are published in the August 8 issue of Science magazine.

Download the high-resolution JPG version of the image. (233 KB)