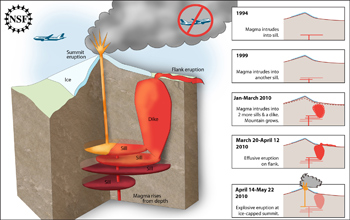 Artist's conception illustrating the three-dimensional geometry (left) and timing of events (right column) at Eyjafjallajökull volcano in Iceland. The complicated "plumbing" inside the volcano consists of inter-connected conduits, sills and dikes that allow magma to rise from deep within the Earth. The first three panels in the time series show distinct intrusive episodes of magma that caused measurable deformation and seismic events in 1994, 1999 and in the first several months of 2010. No eruptive activity occurred during this period of unrest. The fourth panel illustrates the first eruption, between March 20 and April 12, 2010, when basaltic magma (red) erupted onto the Earth's surface on the flank of the mountain. The fifth panel shows the second eruption, between April 14 and May 22, when a different type of magma (trachyandesite, shown in orange), erupted explosively under the ice-capped summit. The interaction of magma and ice initially increased the explosive activity, generating a plume of particles that rose as high as the 30,000-foot flight level and disrupted air traffic across Europe for weeks.

Download the high-resolution JPG version of the image. (500 KB)